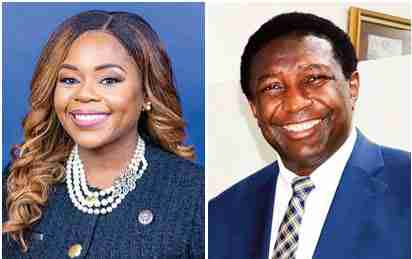 According to the Federal Elections Commission, Holness ﬁled papers to run in the 20th Congressional race against Cherﬁlus-McCormick who defeated him by just ﬁve votes in a special election last year.

The two were vying for the seat left empty following the death of Democrat Congressman Alcee Hastings in April 2021.

Following his defeat, Holness ﬁled two lawsuits to have the election results thrown out, accusing McCormick of bribing voters based on her support of a universal income plan, according to the Associated Press.

Holness alleges Sheila Cherﬁlus-McCormick’s support of a proposal that would pay most U.S. adults $1,000 a month was an attempt to illegally bribe voters.

A court decision is still pending.

McCormick went on to win the seat in January by defeating Republican Jason Mariner, two candidates with no party afﬁliation, Leonard Serrato and Kim Flynn, and Libertarian Mike ter Maat.

McCormick, who lost to Hasting twice for the seat, is serving out the remainder of his term and faces reelection this year.

McCormick has ﬁled her candidacy in a bid to fend off her challengers.

The Congressional district covers the areas of Broward and Palm Beach Counties.

In a statement, Holness said his second bid for Congress focuses on the economy, living wages and health care and education.

“Families are hurting these days as the costs of everyday necessities, including housing, childcare, healthcare, gas, and groceries, continue to rise but wages fail to keep up,” Holness said. “Our communities deserve a champion with experience and follow through to build a stronger, healthier future for all of us. Just as I’ve dedicated my career to improving lives and getting results for the people of South Florida, I will take that same drive to Congress to build lasting prosperity for all who call our incredible region home.”

Despite being fully vaccinated and received a third booster shoot, McCormick tested positive for COVID-19 on April 7 and still recovering, said her spokesperson, Michael McQuerry.

“Congresswoman Cherﬁlus-McCormick received a positive test result for COVID-19 and is currently asymptomatic," he said. "The Congresswoman is fully vaccinated and boosted and is thankful for the robust protection the vaccine has provided.

The Congresswoman will quarantine consistent with CDC guidance, and encourages everyone to get vaccinated, boosted and test regularly.”

During her campaign, she focused on better health care system and on April 13, 2022, she announced $13,304,361 in additional relief fund payments for Florida health care providers though U.S. Department of Health and Human Services.

“With this disbursement, approximately $13.5 billion from the Provider Relief Fund to nearly 86,000 and nearly $7.5 billion in American Rescue Plan (ARP) Rural payments to more than 44,000 providers since November 2021," McCormick said in a statement. "I am pleased to announce $13,304,361 in additional relief fund payments for 190 Florida health care providers.

"In September of 2021, HHS opened applications for $25.5 billion in COVID19 provider funding. With this latest round of payments, nearly $21 billion of this funding has been distributed. Phase 4 payments reimburse smaller providers for a higher percentage of losses during the pandemic and include bonus payments for providers who serve Medicaid, Children’s Health Insurance Program (CHIP), and Medicare beneﬁciaries."

McCormick and Holness are competing in a crowded ﬁeld of candidates seeking the congressional seat.