Homeless in a time of COVID-19 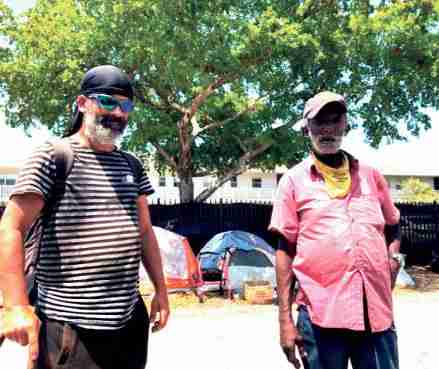 Stay home and put distance between yourself and other people. That’s the government’s advice to prevent the spread of the deadly COVID-19 virus.

But what do you do when you don’t have a home?

With infections and deaths from the COVID19 virus still surging, the urgency of ﬁnding ways to protect those who live on the streets is acute. In Broward, the idea of getting homeless men and women off the streets and into empty motels and hotels is beginning to gain traction. Miami-Dade began renting hotel rooms for some homeless earlier this month, the Miami Herald has reported. On Tuesday, Commissioner Michael Udine will propose doing something similar in Broward.

“I’m making the assumption that with vacancies so huge in some of these places that maybe we can ﬁnd a way,” Udine said in an interview over the weekend. “I support ﬁguring out a way to do it in an economically feasible fashion that provides the homeless and the people they come in contact with protection.”

An estimated 2,800 chronic homeless live on Broward’s streets. Hundreds of other individuals reside in publicly run homeless assistance centers (HACs) in Pompano Beach, Fort Lauderdale and Hollywood as well as in shelters operated by the Salvation Army and other charities.

“People living unsheltered on the street, and therefore anyone who may come into contact with them, are still being put at great risk,” said Jeff Weinberger, a local advocate for the homeless. “These people have no place to use a bathroom. The only place they can go is in the alleys or the bushes or in the central bus terminal when it’s open and it’s closed at night… If your goal is to spread the coronavirus and maybe also hepatitis, let people keep shitting everywhere they want.”

Scott Pring, 53, of Lincoln, Neb. and John Simpson, 79, a two-time Army vet from Atlanta who served in Vietnam and Iraq have been living in tents behind a Salvation Army shelter since March. They said police no longer hassle them, as they did weeks ago when city commissioners were considering a camping ban, but government has been of no help.

Scott Pring, left, and John Simpson, have lived in tents behind a Salvation Army shelter since early March.

“There aren’t any toilets. No showers,” said Pring. “There’s nobody sick either.” He and Simpson said they’ll walk a halfmile to the downtown bus station and wait in line to get into the restroom. They’ll take another long walk to Sunrise Boulevard to use HOPE South Florida’s mobile shower unit when its open on Tuesdays Thursdays and Saturday.

Weinberger has been prodding the county and the city for weeks to do something to protect the county’s homeless population from COVID-19’s onslaught. “We’re calling for motel rooms for at least the most at-risk people on the street,” he said. “There’s also a need for a sanctioned encampment where they can get the amenities they need to survive, like toilet and shower facilities.” To date, he’s seen no help.

Police surveillance unit parked next to the homeless camp behind the Salvation Army shelter.

“I’m beyond disgusted, not only that the county and City of Fort Lauderdale have provided nothing to protect the health and safety of homeless persons, but that each, in their own way, has engaged in moving forward either laws or policies or practices that have made life on the street even worse than it was before the onset of the pandemic. When this is over if not before, heads should roll,” Weinberger said.

But some limited help does appear at last to be on the way.

Commissioner Nan Rich said that the homeless initiative had acquired 2,000 face masks for distribution. And at Tuesday’s meeting, Broward commissioners will consider spending $550,000 to purchase mobile sanitation equipment to be placed at various locations. The equipment will include two showering stations, each with two shower stalls, and “fully functional restroom stations with three toilets per rig and another showering station with six shower stalls.’’ Two nonproﬁts, TaskForce Fore Ending Homelessness and HOPE South Florida, would partner with the county on the project, which was established to mitigate the spread of COVID-19 “by increasing the availability of sanitation equipment for individuals who are experiencing street homelessness, deﬁned as individuals living on the street and/or in places not meant for human habitation.”

Funds would come from “a non-departmental appropriation for COVID-19 expenses,” and TaskForce “will organize the delivery of mobile sanitation equipment in coordination with multiple municipalities and monitor all mobile sanitation stations for cleanliness, capacity and usage.” Besides Fort Lauderdale and Pompano, potential locations have been identiﬁed in Davie and Hollywood.

In county ofﬁcialese, though, it looks as though the public stink was nearly as big a motivator as the virus for county action.

“As a result of public restrooms closures in parks and libraries, as well as private businesses and alternatives such as fast-food restaurants, the county’s Homeless Initiative Partnership (HIP) section has experienced an increase in phone calls from constituents pertaining to human feces and bodily fluids in and around public and private buildings, bridges and bus stops,” says the county administration’s explanation for the funding request.

As for ﬁnding roofs to put over the heads of the needy during the current epidemic, help seems farther away. Many shelters report waiting lists for beds. The county’s HACs are full and have less capacity than normal due to recent social distancing measures, said Rich, who chairs the county’s Homeless Continuum of Care Advisory Board.

“We had to stop intake for a short period because of that, but one positive thing: to date there continues to be no COVID-19 cases in the shelters due to the wonderful work of the staffs,” said Rich.

“While the county continues to report no known cases of COVID-19 at any of the four main shelters, I and others I know are incredulous about that claim,” said Weinberger. “If people aren’t being tested, then obviously they won’t test positive.”

Those four homeless shelters are the Central HAC at 920 NW 7th Ave. in Fort Lauderdale, the North HAC at 1700 Blount Road in Pompano Beach, the Broward Outreach Center at 2056 Scott St., Hollywood; and the Salvation Army shelter, 1445 W. Broward Blvd.

Rich said Broward’s homeless partnership is working with landlords in the county to ﬁnd available beds. She said Fort Lauderdale ofﬁcials, notably Commissioner Sorensen, have “been talking to hotels and motels so we can house them there.” She added that Broward Convention Center boss Stacy Ritter told the commission she’s been in touch with hotels that would consider taking in the homeless.

Homeless advocates split Not all homeless advocates are enthused about the idea. “I believe it would be a challenge to manage given the current climate and CDC [Centers for Disease Control] protocols and shelterin-place directive,” said the Rev. Ted Greer Jr., CEO of HOPE South Florida. “I would not like the idea of having to move our homeless friends out of the hotels and back to the streets after we have defeated COVID-19.

“Alternatively, I would rather see the county, city and the private sector make a signiﬁcant investment into the current system of care to increase the local capacity over the next 3-6 months.”

County Administrator Bertha Henry said Saturday she wasn’t aware of any initiatives to rent hotel rooms for the homeless, or of any interest in the idea by hotel owners suffering from a dearth of empty rooms during the economic shutdown. “Bertha Henry hasn’t been approached, but I can’t say that a member of my team hasn’t been approached,” she said. “But I’m gonna ﬁnd out when I hang up.”

Henry added that she believes federal stimulus money will be forthcoming that could be used to pay for those rooms. “We put in our certiﬁcation for it and we got conﬁrmation. Now we’re waiting.” So, too, do Broward’s homeless as the horrible reality of life on the streets today plays out.