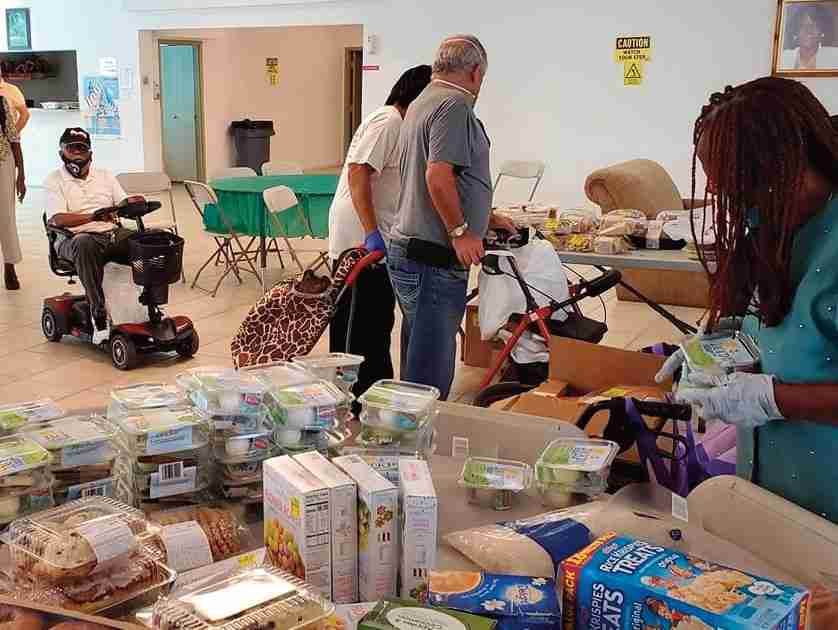 Miami – Sixty-eight-year-old Mattie Temple was enjoying retirement, spending more time with her grandchildren and other relatives, traveling to The Bahamas on a cruise once a year and sporadically hosting cookouts at her Broward County home.

But with inflation at 9 percent, the highest since 1982, Temple’s contentment turned sour when she was forced to come out of retirement and work to make ends meet.

Living on a ﬁxed income, Temple, who retired as a social worker, said she could barely afford the increasing food and gas prices as well as a rent increase, and her savings were less.

"For three years, I’ve been having fun retired, waiting for so many years for it, and now I’m back working," said Temple, who lives alone. "I thought about getting a roommate to help with the expenses but I don’t want to relive my previous experience."

Temple is among local Black South Floridians hit the hardest by inflation which forced some senior citizens to go back to work so they could afford the rising costs of basic living expenses: food, gas and rent.

Inflation placed their income below the poverty thresholds and some senior citizens across the nation started returning to the workforce during the pandemic but a lot more followed because of inflation.

According to the Associated Press, more than half a million retirees across the country had to go back to work because inflation is simply too much this year.

For some Blacks who are employed in South Florida, they had to take a second or third job and seek assistance from local organizations and food banks to help feed their families.

The organizations and food banks started distributing large volumes of food and other assistance to people ﬁnancially strapped during the COVID19 pandemic and the numbers rose during inflation.

Republican Florida Sen. Rick Scott acknowledged the impact of inflation on the state’s retirees and the working-class people during a Republican Leadership press conference.

Scott commented on the impact of price hikes and spikes on people who thought they had secured their postwork futures, only to see their dreams dashed, “We are hearing stories from everybody about what’s happening in their states,” Scott said. “In my state, I’ve got a lot of retirees. Many of them are delaying their retirement or coming back to work because they can’t afford it right now. They can’t afford the gas, the food, the rent that’s gone up,” said Scott, the richest man in the U.S. Senate.

“You’ve got families that are going to food banks,” Scott added. “They’ve never gone to food banks before in their lives. You’ve got people taking second jobs all across our state. It’s happening in all of our states.”

Scott blames President Joe Biden and his administration for inflation and said he has no plan to deal with inflation.

“All he does is blame everyone else, including Vladimir Putin, for inflation," Scott said. "All he’s offering is more inflation and less opportunity.

But Scott offered no plan, and until a plan is in place to soften inflation, retired people are back to work and some people spend less time with their children because they have to work two or three jobs most days of the week.

Harry Pendleton, 69, is performing odd jobs to earn a second income so he could afford the high food prices and his increase in rent which is now $1,400 a month for a one-bedroom apartment in Miami.

Disabled, Pendleton said he retired from a bakery when he was 63 years old and struggled then living on a ﬁxed income and receiving government assistance.

Now with inflation, he needs more handyman work so he can stretch his budget to buy groceries twice a month and pay his rent and light bill.

He said some days he eats less.

"Inflation is really hurting people, especially blacks who don’t make enough money to live in Miami," Pendleton said after shopping at Winn Dixie. "Everything is going up, light bill, water bill, food, etc., and blacks can’t get by on their salaries especially on a ﬁxed income."

Quin, 30, said before inflation, he worked one job and that took care of most of the living expenses for him and his family.

Now, he’s working two jobs so he could afford the high food prices and increase in rent due to inflation and spends less time with his kids.

"Inflation changed my life," said Quin, who receives assistance from a Miami food bank. "Before, I could work and come home to relax.

Now it’s going from one job to the other. I need a second job to support my family during this time."

The food bank, located at the corner of N.W. 7th Avenue and 55th Street in Liberty City, provides food for individuals and families that live in distressed areas or have been compromised by emergent situations.

Sherina Jones, a visionary at Village (Free) age, said the food bank has been distributing food since 2019, and the assistance peaked during the pandemic and inflation.

She said the organization went from serving 211 people to 237 per day this year from senior citizens and homeless people to individuals living on a low income, and even little children.

She said a sizable portion of the senior citizen population is homeless.

"They are trying to ﬁnd a way to ﬁll the gap since the cost of living went up," she said. "Everyday it’s seniors, veterans and people who have jobs but their paychecks are not enough to cover the high prices of food and other living expenses."

The organization distributes food to about 500 people, mostly senior citizens and the homeless, daily but the demand has been so high since inflation that the food bank fears it may run out of food at any time.

She said the food bank feeds families with lots of children and the lines are long each day.

Douglas said they leave with bags of food because they can’t afford it at the store.

"We may run out of resources," she said. "There’s a high demand for food like bread, meats and canned goods. We are scrambling to ﬁnd food to feed them."

Douglas said the senior program allows her staff to bring food to elderly people living in senior buildings because they are homebound or afraid to go out because of Covid.