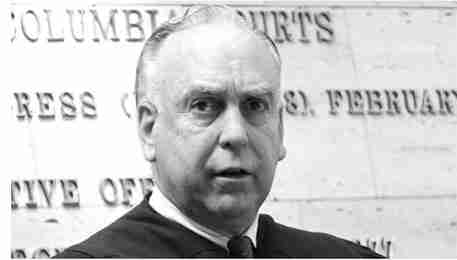 WASHINGTON (AP) — A federal judge in Virginia rejected a bid by President Donald Trump’s former campaign chairman, Paul Manafort, to throw out charges in the special counsel’s Russia investigation, clearing the way for a muchanticipated trial to start as scheduled next month.

The decision Tuesday by U.S. District Judge T.S. Ellis III was a setback for Manafort in his defense against tax and bank fraud charges brought by special counsel Robert Mueller.

It also hobbles a favored talking point of Trump and his legal team, who have repeatedly attacked Mueller’s investigation as overly broad and sought to undermine its legitimacy. The president had applauded move forward Ellis for his skeptical comments and pointed questioning during a hearing in which he asked prosecutors whether they brought the case to get Manafort to testify against Trump.

Manafort, also facing separate charges in the District of Columbia, is the only one of the four Trump aides charged by Mueller to opt to stand trial instead of to cooperate with prosecutors. None of the charges relate to allegations of Russian election interference and possible coordination with Trump associates, the main thrust of Mueller’s public appointment order.

In a 31-page ruling, Ellis rejected the argument of Manafort’s attorneys that Mueller had exceeded his authority by bringing charges unrelated to Russian election interference. He said the May 2017 Justice Department order that appointed Mueller as special counsel had specifically empowered him to pursue crimes that arise out of the investigation, and that the case against Manafort fell within that authority.

Mueller’s team, the judge said, had “followed the money” from pro-Russian officials to Manafort to develop allegations that he was hiding the payments from the U.S. government and depositing the money in offshore accounts.

Besides, the judge said, an August 2017 memo from Deputy Attorney General Rod Rosenstein made clear that those payments from the Ukrainian government of Viktor Yanukovych were fair game for Mueller’s investigation. The memo, filed under seal to Ellis, also includes the specific activities he is authorized to investigate involving other people beyond Manafort, at least through the middle of last year.

“No interpretive gymnastics are necessary to determine that the investigation at issue here falls within this category of allegations described in the August 2 Scope Memorandum,” Ellis wrote.

Even so, the judge did hint at some of the same concerns he articulated at a contentious May hearing in which he said he didn’t see the connection between the Mueller investigation and the Manafort indictment. That skepticism gave Trump’s legal team some optimism that Ellis might dismiss the case. Trump had even read some of Ellis’ quotes aloud during a National Rifle Association rally, and as late as early June, Trump lawyer Rudy Giuliani had built up suspense around the ruling, saying the judge was taking weeks to craft an opinion because “there’s a real problem” with Mueller’s appointment.

Next post Roseanne Barr in interview: 'I made myself a hate magnet'