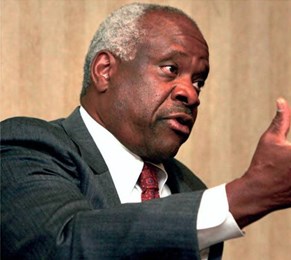 WASHINGTON (AP) – Clarence Thomas has been a Supreme Court justice for nearly three decades. It may finally be his moment.

Many Americans know Thomas largely from his bruising 1991 confirmation hearing, when he was accused of sexual harassment charges by former employee Anita Hill charges he denied. People may know he’s a conservative and has gone years without speaking during arguments at the court. But scholars say it would be wise to pay closer attention to Thomas.

Thomas is now the longest-serving member of a court that has recently gotten more conservative, putting him in a unique and potentially powerful position, and he’s said he doesn’t plan on retiring anytime soon. With President Donald Trump’s nominees Neil Gorsuch and Brett Kavanaugh now on the court, conservatives are firmly in control as the justices take on divisive issues such as abortion, gun control and LGBT rights.

Thomas, for the first time, is on a court where there are at least four votes for some “pretty radical” decisions, said political science professor Corey Robin, the author of a Thomas book due out in September. Robin says the question will be whether the court’s more conservative justices _ Thomas, Gorsuch, Kavanaugh and Samuel Alito _ can get Chief Justice John Roberts, a more moderate conservative, to go along.

Thomas, 70, became the high court’s longest-serving justice, the “senior associate justice,” when Justice Anthony Kennedy retired last summer . But unlike Kennedy, who sat at the court’s ideological center and was most often the deciding vote when the court split 5-4, Thomas is consistently on the court’s far right.

That’s won him praise from Trump . As a presidential candidate, he called Thomas “highly underrated.” Trump said Thomas has “been so consistent for so long, and we should give him credit.”

More than 20 of the men and women Thomas mentored as law clerks have gone on to hold political appointments in the Trump administration or been nominated to judgeships by Trump . Thomas and his wife, Virginia, herself a well-known conservative activist, have dined with the president and first lady.

Elizabeth Wydra, president of the liberal Constitutional Accountability Center, acknowledged that Thomas’ views may now have more sway, something she described as “terrifying to many progressives.”

Still, Thomas’ views can be so far from his fellow justices that neither Roberts nor Chief Justice William Rehnquist before him have assigned Thomas big, landmark opinions on the belief that he won’t be able to keep together the votes of his col leagues, said Ralph Rossum, the author of a book on Thomas. Instead, Thomas often writes separately, speaking only for himself. Some critics dismiss those solo opinions as uninfluential, but Rossum disagrees.

“He stakes out a position more forthrightly or vigorously than other justices are willing to go, but they’re kind of sucked along in his wake,” Rossum said, adding that, like a magnet, “Thomas drags the court in his direction. They may not go as far as he goes, but they go further than they would have otherwise.”