Ladies of Futurity prepare for college 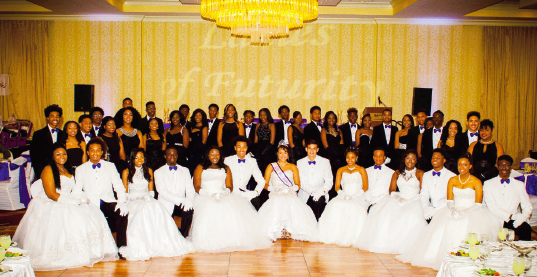 WEST PALM BEACH, Fla. – Tracey Graham and her daughter Amaris, of West Palm Beach, make a powerful tag team, working to help college girls who need some assistance with the necessities of college. This mother-daughter duo recently made some dreams come true for 22 high school girls through their non-profit organization, Ladies of Futurity. Not only did these girls learn about the sex trade/sex trafficking, public speaking and finance, but they also are heading to college armed with refrigerators, a trunk full of linens, iron and ironing board, lamps, a bible and so much more to help get them off to a good start for their new life as a first-time college student.

The Grahams recently held their Ladies of Futurity 3rd Annual Scholarship and Awards Gala at the Palm Beach Gardens Marriott, June 4, where they crowned “Miss Futurity,” and awarded the trunks and scholarships to deserving young ladies from Palm Beach County schools. A night of coronation, dancing with escorts and dads, tributes by fathers, plus glitzy and glamorous decor to match their gowns and tuxedos –was all a night to remember for the Ladies of Futurity Class of 2016. The girls range from 9th to 12th grade and were treated like princesses during the big night. The choreographed dances and formations were spectacular and scholarships, awards, speeches, presentations, declarations by the girls and words of wisdom and honor from their fathers. Tracey and Amaris paid special attention to every single detail of the evening. All of the intricate dances and formations were choreographed by Amaris, who is herself a prolific dancer.

Many said not only do they feel like queens during the coronation, but many say they have come to maturity as a result of the organization and its two-hour regular meetings, workshops and sessions sponsored by the group and held throughout the year.

Taylor Reichel, who will be a college freshman this fall, said she joined the organization and initially couldn’t fathom the idea of speaking before an audience. Fast forward to the recent gala and Reichel gave a riveting speech as president of the group, standing before a packed ballroom of 500 guests. “This organization has changed my life,” Reichel said through tears. She is also one of the recipients of the group’s “Dr. Barbara Carey Shuler” Scholarship. And that’s exactly what the founders intended to do –change lives. “We came up with Ladies of Futurity in 2013 thinking of what girls needed in life, such as life skills and educational support.,”said Tracey Graham. “We wanted to do something to launch them into the next phase of their life.”

Amaris, now 20 and an upcoming junior at Tuskegee University, was a mere 17 years old when she co-founded the organization with her mother. She said the organization is strictly about the girls and how to make their lives better. “We’re changing the perception of what girls look like and are thought of,” she said.

At the gala, each girl was escorted by a male who treated them with extraordinary care and grace throughout the night. It was important to the Grahams that each escort demonstrated social graces, manners and treated the girls with the utmost respect and dignity, never leaving their side that night.

It’s a practice they want the young men to adhere to for the rest of their lives.

The theme for the night was “The Me You’re Destined to See,” in which each girl proclaimed to the audience that there was so much more to her than her hair, her lipstick, her nails, and her smile. Of more critical importance, was her inner self, her drive, her motivation and her determination to make something of her life. “A lot of people see you, but don’t really know you,” said Tracey. The “See Me” segment of the evening was a big hit with the audience as each girl told of her aspirations and told the audience to bypass her outer beauty.

“It was important for the girls to be showcased in ways they’ve never been showcased before,” said Amaris. At each meeting, throughout the year, the girls recite an oath, declaring who they are and proclaiming a victorious future for themselves.

In addition to learning various life skills, they also learn about domestic violence and the sex trade and how to avoid such ills. The courses and workshops are taught by experts, including those from the Palm Beach Sheriff’s Office along with other professionals in various fields.

Another important aspect of the organization is community service. The girls have given to the poor and the needy by delivering turkeys during the holidays, as well as giving toys and Easter baskets, and serving as young role models for kids. They also worked concession stands at Miami Dolphin games.

“We give a lot to our girls because of their need, but it’s still important for them to give back,” said Tracey. “Community service is very important to us.”

Each trunk the girls receive is valued at $2100 and is given with the help of grants, donations and sponsorships. This year, 11 refrigerators and trunks filled with necessities were given out.

But the Grahams said they need much more monetary support to continue their work. “We need more community support –monetary support, and we need a building to hold our meetings and rehearsals because it’s very expensive renting facilities so often,” said Tracey. “We need more funds in order to give these important necessities and gifts to these deserving young ladies.”

Scholarships and special awards were handed out during the gala as well. They included the following awards:

Next post Want to buy an assault rifle in Florida? No problem