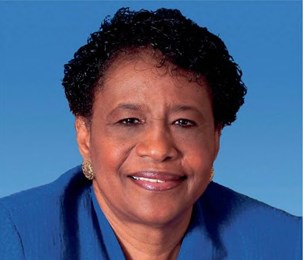 MIAMI GARDENS – Miami-Dade County Commissioner Barbara Jordan kicked off the festivities by joining the energized crowd in doing the Wakanda salute from the movie “Black Panther” at her sixth annual Black Heritage Festival. Approximately 500 residents flocked to Miami Carol City Park to celebrate Black History Month and the contributions of African Americans at the annual festival.

The event was hosted by Commissioner Jordan and City of Miami Gardens Mayor Oliver Gilbert on Saturday, Feb. 23 at Miami Carol City Park. Jordan said her festival honors the rich and diverse heritage of Black people.

“This year’s theme was ‘Historically Made: HBCU Edition,’ and it was wonderful seeing residents dressed to represent their colleges and seeing the Greek organizations also participate in the festivities,” Commissioner Jordan said.

Over 800 elementary, middle, and high school students were acknowledged for making honor roll distinctions at 14 schools in District 1. Business owners were on site promoting an array of cultural wares along with several food trucks and other food vendors.