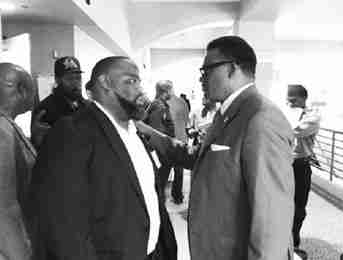 “Based on the discussion of the DBCF executive committee, it was clear that Dwight Bullard has the clearest understanding of the need for grassroots organizing,” DBCF President Henry Crespo Sr. said. “And that is why is he received our recommendation.”

The candidate interviews with the DBCF and Black media took place on Friday, Jan. 6 at the Rosen Centre Hotel in Orlando.

On Saturday, Jan. 7, the caucus met again to share perspectives and choose a candidate to recommend.

“It was an insightful and spirited discussion,” said Lydia Hudson, DBCF First Vice President. “We have some very talented candidates with very distinct talents. Iwish there was a way to roll them all up into one leader.”

During separate interviews, the Democratic Black Caucus of Florida Executive

Campaign Committee, chaired by Beverlye Neal, and her team asked the five candidates questions about their motivations, ideology and what changes they plan to make in the party if elected.

The Democratic Black Caucus of Florida has 19 chapters with more than 300 members across the State of Florida, which includes an array of county and municipal elected officials as well as County Party (DEC) Officers.

The leading Black political organization in Florida, the caucus represents more than 1.6 million black Democrats, who make up 33 percent of all Democrats in Florida.