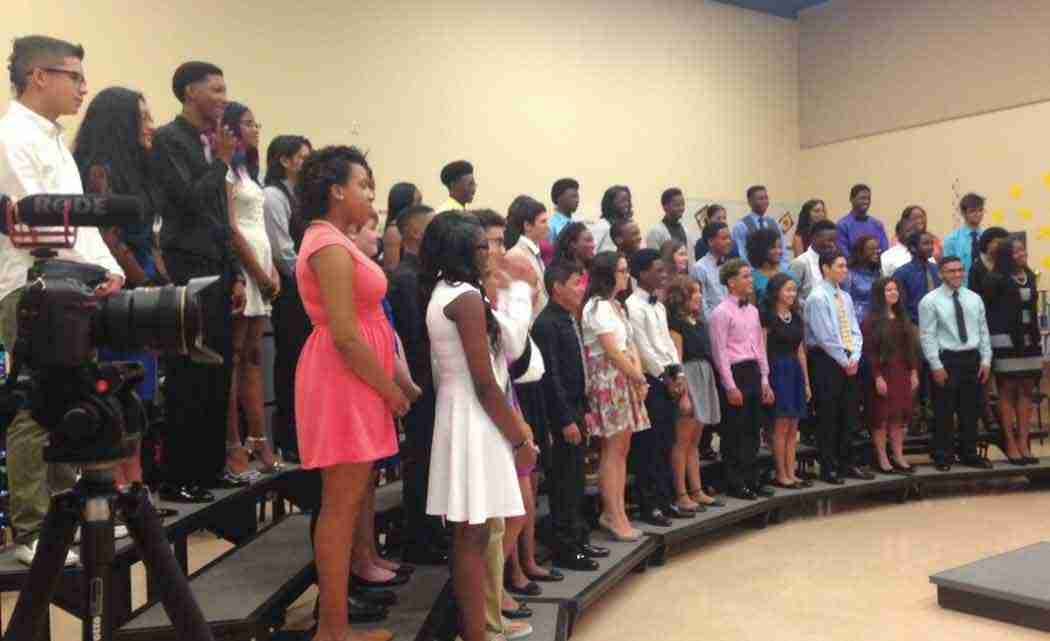 West Palm Beach, Fla. — Jashonte Hollis hasn’t ventured too far from South Florida just yet.  So far, she’s only been as far as Orlando in her travels. But the 17 year old Boynton Beach High junior is ready to spread her wings. And it looks like that could possibly happen in a major way, thanks to her amazing singing ability and Boynton Beach High’s choir, Dimensional Harmony, which got great news on Friday. The noted chorus learned that they are one of only a few school choirs worldwide that is being invited to London to sing in the London International Choral Festival in December.  Having traveled only to Orlando and now possibly to London is a huge step said Jashonte, but the excited teen can’t wait for the experience.  “I’m very excited and I’m definitely ready for it,” she said, beaming. “I hear it’s a 10 hour plane ride, but it’s worth it. It will be a great life experience!”

Boynton Beach High’s chorus is the only chorus in the state that’s been invited to participate in the festival. And only seven choirs worldwide have been extended the invitation. A Lord Mayor from London and another London official came to the school Friday to formally invite Dimensional Harmony.  Senior Patron and past Lord Mayor of London’s borough of Westminster, Catherine Longworth, along with Robert Bone, executive director of the London International Choral Festival, came to the school, where the Red Carpet was laid out for them, and they were greeted by the Mayor of Boynton Beach, Jerry Taylor, and the school’s principal, Fred Barch. The choir sang for them, leaving a huge impression. There was much pomp and circumstance surrounding the visit, and chorus director Sterling Frederick said it was breath-taking having the London dignitaries come so far to invite the choir to London. “It was a beautiful experience and one of the most thrilling events I’ve had in my life, as well as the students,” said Frederick, who has led the choir all of its 15 years.

The nearly 50 choir members are ecstatic. Like Jashonte, Maurice Blue, 18, has never been on an airplane before. He can’t contain his joy at the invitation. “It’s a once-in-a-lifetime experience, so I’m ready to take it (the ride). Not everyone gets this chance,” he said.

Over the years, Frederick has led the choir to some exciting places. Dimensional Harmony has sung at Carnegie Hall, Radio City Music Hall, the Apollo Theatre, on the “Today Show” on NBC and many other places. But each year, new choir members join who haven’t been far from Boynton Beach. Frederick said for nearly half of his students, just going up the street to West Palm Beach is a big deal. So that’s why this London trip is so important.  Frederick said it’s more than just a music trip. It’s a life experience that they otherwise may never get to have. Frederick said he often has to act like much more than a teacher and a music director. He also has to be the father that many of them don’t have. “They know I’m going to be there for them. Building relationships is what we work on…building a trusting relationship,” said Frederick, who graduated with a music degree from Palm Beach Atlantic University. “We have a team atmosphere and a family atmosphere,” he added. “And when you work hard, and you’re humble, good things happen.”

Kathy Burstein, Media Relations Specialist with the Palm Beach County School District, said the trip will cost $149,000. And the school doesn’t have the money, said Principal Fred Barch.  So they, and the community will have to raise the money for Dimensional Harmony to make the trip. Burstein has set up a GoFundMe account online to receive donations.

In a previous interview, Barch said they’re exploring all options to raise the money. “We have very talented students. They’re very dedicated and deserving of this trip.”

The festival runs from December 29 through January 2 and is part of London’s New Year’s Celebration. It’s in its eighth year and has scouts to find the best choirs, orchestras and bands in the world. Boynton Beach’s Dimensional Harmony was among those they had heard about and then sought out and extended the invitation. “It’s a tremendous honor,” said Frederick.

If you want to help this choir make it to London, please call Boynton Beach High School at 561-752-1200. The choir’s GoFundMe account can be found at: GoFundMe.com/dimensionalharmony