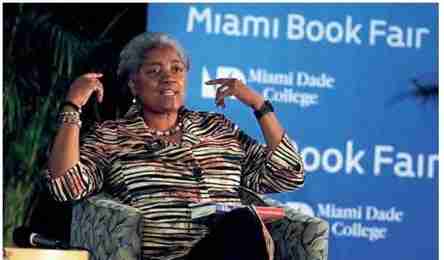 She was feisty, funny and full of criticism for the Democratic Party; a party she said is in serious debt, in part, because of a bloated Democratic National Committee that allowed consultants to receive $25,000 a month for doing little or nothing.

Donna Brazile was in town last week at the Miami International Book Fair to Fair promote her book, “Hacks: The Inside Story of the Break-ins and Breakdowns That Put Donald Trump in the White House,” which was released earlier this month.

She was interviewed by Ana Navarro, a Republican strategist who is also dear friends with Brazile.

Brazile served as the interim chair of the DNC following the abrupt departure of Congresswoman Debbie Wasserman-Schultz amid accusations of unfairly assisting the Clinton campaign against primary challenger, Bernie Sanders. Emails surfaced indicating Wasserman Schultz made disparaging remarks about Sanders and his campaign manager.

Among her claims in her memoir, Brazile said the Clinton campaign was so out of touch with reality that it brushed off exit polls and didn’t realize it was in trouble until the night of the election when it became apparent that Donald Trump was on his way to becoming the 45th president of the United States.

When Clinton made financial contributions to a debt riddled DNC, Brazile said she was grateful, but claimed “she put us on a starvation diet.”

After resuming the chairperson’s role the DNC following Wassermanat Schultz’s departure, Brazile said hers was essentially a powerless position. Brazile briefly held the role in 2011.

When then candidate Donald Trump asked African American voters, “What do you have to lose,” Brazile said she was in her office screaming, “Obamacare, climate change, gay rights, civil rights, voting rights.” Her concerns would remain limited to the office and a USA Today column, she said, because she had no money to place the ad she thought would be the most effective response.

“I had no money. The money I was raising was not under my control,” she added.

Brazile was also miffed that despite her vast experience, her press releases had to be approved.

“I’ve been a press secretary, I’ve been a communications director, syndicated newspaper columnist, I write for O magazine, Ms. Magazine, Essence magazine and you have some person half my age approving my columns,” she told the packed Miami Book Fair audience.

“I went along to get along,” she added. An open letter posted on Medium and over 100 former Clinton campaign staffers dispute Brazile’s characterization of the Clinton campaign.

“Donna came in to take over the DNC at a very difficult time. We were grateful to her for doing so. She is a longtime friend and colleague of many of us and has been an important leader in our party. But we do not recognize the campaign she portrays in the book.”

Brazile said the outcome of the election had little bearing on her decision to chronicle her experience.

“I would have written this book if she had won the electoral college and the popular vote. Because the American people need to understand.”

Next post Tech firms scrounging for skilled workers training their own