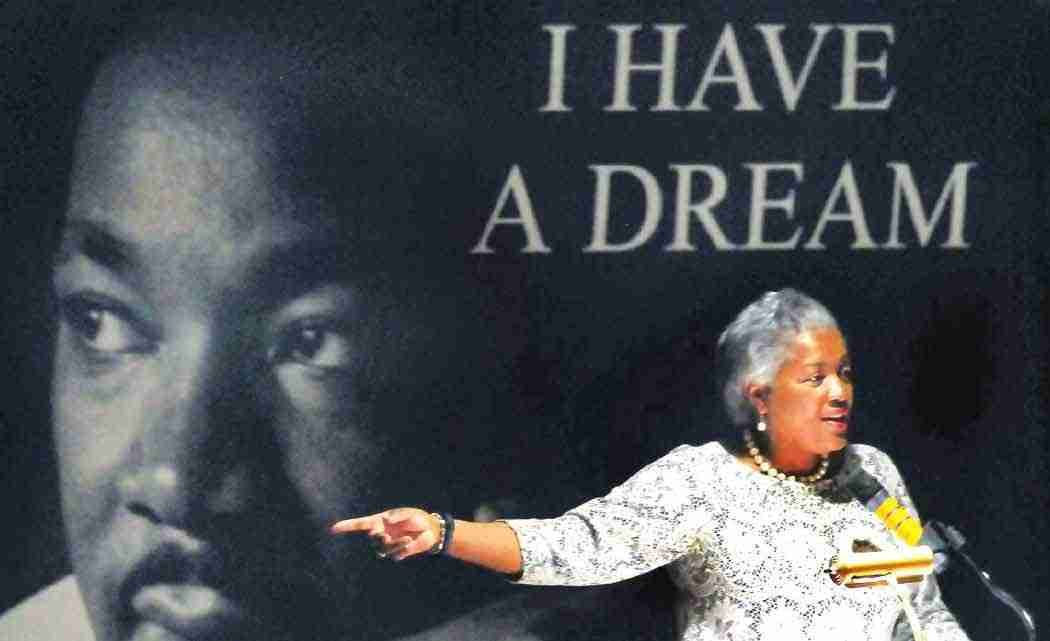 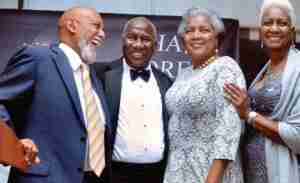 “I’m ready to defend the President on his State of the Union speech,” said the commentator. “All the others want to do is whine, and block,” she said, speaking of Congress, which is known for putting up roadblocks on the President’s legislation. “I’m so glad Obama has discovered his pen (veto power). I have his back, and I know you do too,” she said to the crowd at the black tie affair. “Our work is not done. When you take down walls, it sometimes leaves debris. And sometimes that debris is racism!”

Brazile urged the audience to see the movie, Selma, produced by Oprah Winfrey and actor Brad Pitt among others. In Washington, D.C., Brazile and some other friends and supporters raised $175,000 to take middle school children to see the compelling movie. She urged the audience to take a child to see the movie, which depicts the violence blacks confronted when trying to gain the right to vote during the Civil Rights era.

In a fiery speech, Brazile posed the question: ‘What would Dr. King think of the world in 2015?’ She gave a rousing answer, as she pointed out that Dr. King was more than just “a dreamer.”

“Dr. King was not naïve,” she said. “He didn’t think that protests and speeches would change consciousness.”

So what would Dr. King think of the world we now live in? Brazile answered poignantly. “He would be delighted that President Obama was elected and re-elected. But he would be disturbed about the racial gap that remains between blacks and whites in terms of opportunity. He would be disturbed that too many kids are born into poverty. He would demand that we do something about our public schools. He would demand that we take action NOW. He would challenge every politician in this room to do more. He would be alarmed at the mass incarceration of our young black men. He would say,’ stop killing our young people,’” she said, referring to youngsters Trayvon Martin, Michael Brown, Eric Garner and others. “He would also call out attempts to dismantle equal opportunity and Affirmative Action,” she added. “Dr. King would not be popular today, because he would take on all of these issues. It’s not enough to remember Dr. King and his legacy, and not be compelled to act,” said Brazile, urging the audience to get involved.

Brazile said she stopped going on TV shows where she was the token black political strategist and commentator. “I’m on TV because I fought. And I kept talking. But I don’t want to be the only one of anything, she reiterated. “Dr. King was not for tokenism. He was not about grandstanding!”

Brazile said the last 10 years have been difficult ones for her. “But my work is not done. There are days when I want to slow down. The last ten years have been most difficult. It took me to go on national television to get help during Hurricane Katrina for my sister, who is disabled. She was left to die. I called Wolf Blitzer (CNN news anchor) personally.” She eventually provided help for her sister, who survived the hurricane.

But it was her persistence that got her developmentally disabled sister out alive. “We have to remain vigilant,” she told the crowd. “We must also vote, ladies and gentlemen. We cannot expect change if we do not get involved in the process. Hold on to your hope and faith. It’s easy to become apathetic and to give up. Dr. King held on to his hope and faith. Had he lived, he would have inspired us to move forward. How should we proceed from here? We will continue to fight. We would keep the faith! Dr. King’s legacy remains vital to the future of America! This is our moment. Don’t stop marching. This is our time! God will use each and every one of you. God will make a way!” she concluded.

Brazile received a standing ovation. She mingled with the crowd, taking pictures and signing autographs.

Eureka Irvin, Chairwoman of the Riviera Beach MLK Planning Committee, said Brazile was an excellent choice as speaker for the banquet. “She was an excellent choice – I knew she would be. Before taking on any task I ask God for direction. I asked Him to give me a speaker to seek after I heard her name whispered in my ear.  Sometimes I think we forget the simple things – like all people matter and change is not awful thing but you need courage for it. Ms. Brazile reminded us of that. I’m beyond pleased with the banquet and all of the month’s MLK events in the city of Riviera Beach. I look forward to next year.”