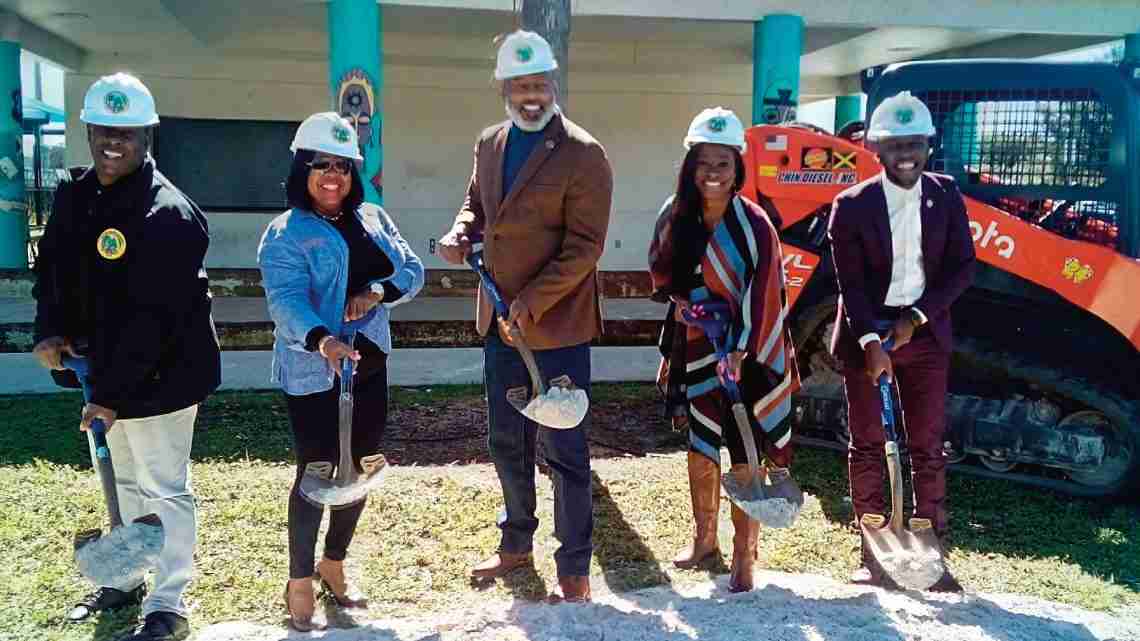 Miami Gardens, Fla. – The City of Miami Gardens broke ground on the third and ﬁnal phase of capital improvement projects at Dr. Les Brown Park, a state-of-the-art recreation building which will accommodate a locker room, a community room, a large storage and restroom areas.

The event took place on Jan. 18, at the park, 19405 N.W. 32nd Ave., where ofﬁcials, police and residents were on hand to celebrate the city’s latest construction project.

The 3,500 square foot proposed recreation center is part of the city’s vision to upgrade the 19 parks and recreational facilities in Miami Gardens. The park itself is about 30-acres. The old building was demolished to make way for the new facility which costs an estimated $4 million, city ofﬁcials said.

PLAN COMES TOGETHER In addition, $1.7 million was spent on the ﬁrst phase of the project, a large playground and the second phase, a new football ﬁeld for high school and Pop Warner games. An estimated $60 million of General Obligation Bond (GOB) money will be used to upgrade the parks along with monies from the Community Development Block grant.

Mayor Rodney Harris noted that Miami Gardens was celebrating the dream of the current and previous city councils of improving the parks and recreation facilities since incorporation in 2003, a day after the celebration of the birthday of the Rev. Dr. Martin Luther King Jr. He thanked residents for approving the GOB referendum several years ago that will allow the parks renovations.

"This is just part of the work to make it safer for kids to play and have fun," Harris said. "We still have more work to be done. Promises were made to our residents and we must fulﬁll them."

Miami-Dade County turned over the park, which was previously called Brentwood Park, to Miami Gardens after the community incorporated in 2003. In 2013 the city renamed the park Dr. Les Brown Park after the famous motivational speaker who was born in Liberty City but lived in Miami Gardens for 43 years.

Brown was a member of the Ohio House of Representatives from 1977-1983. He had a TV talk show in the 1990s and hosted a syndicated radio program in California. During his many speeches he said he had had to overcome being declared mentally retarded in grade school to get where he is today.

Longtime Miami Gardens resident Sonia Flowers said she was there when the city renamed the park after Brown and he deserved the honor. "It was an awesome moment for a pioneer who lived here and taught so many young people," she said. "He’s a great man."

Flowers said Miami Gardens is moving in the right direction with upgrading the parks and recreational facilities.

"The city is moving forward with positive results and the construction is just an example of what they are doing to improve the city," she said.

Next post 5 ways to lose your first 20 pounds, fast