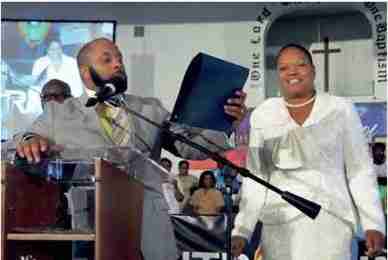 Minister Genine Rumph’s time has come. In fact, it was her patience and her willingness to stay the course, among other virtues, that eventually landed her a place in history at one of the largest churches in South Florida – St. John Missionary Baptist Church in Boynton Beach.

Rumph has broken the glass ceiling at the well-known church and has become the first female on the ministerial staff in the church’s 109-year history — marking a huge milestone, indeed!

Having been tapped by the previous pastor, Rev. Lance Chaney, who is now deceased, Rumph patiently waited throughout his tenure, and after his passing, she continued to be steadfast for two additional years under the new pastor, Rev. Jovan Davis.

Like Chaney, Davis was so impressed by her endurance, service and faith-filled lifestyle that he eventually saw fit to add her to the staff this fall, on the occasion of the church’s 109th anniversary. His appointment made her the first female licensed minister in St.

John’s more than century-old existence. Other ladies were under consideration at one time or another, but they either left the church after Chaney’s passing or they moved on.

But Rumph was undaunted, and she never wavered said her husband, Michael, as well as Davis. Rev. Davis said for many reasons he felt compelled to bring her into the fold on staff at the popular church. “Prior to my arrival, she was training under Pastor Chaney … but he died before being able to move her forward,” said Davis. “For two years I noticed her steadfast commitment and dedication. I was fulfilling the mission of our predecessor.”

Davis appointed her as a licensed minister on the occasion of the church’s 109th anniversary. “I’ve served for two years and I know for a fact that she has a strong prayer life and she’s very spirited.

She remained in the process in ministry, and while some other ladies left and went on to other churches – against all odds, she remained committed to the journey,” said Davis.

There were no by-laws that kept women out of the pulpit at St. John, said Davis. It was a matter of tradition, in which only men were called to work in the church. And the tradition continued until Rumph’s recent appointment, shattering that glass ceiling. Davis said he is proud of the people at St.

John for recognizing that anyone can serve at their church.

“I’m proud of the people at St. John … you can be appointed — not based on gender, not on your past.

God can use both men and women to be carriers of His word. We’re change agents here at St. John and as a pastor, I’m happy they’ve embraced this change,” he said.

Rumph’s husband said it’s well deserved. “It’s great. I feel great about it. She didn’t push it, she took her time and kept waiting, and it eventually happened for her. She stayed the course,” said Michael Rumph proudly, who has belonged to St. John his whole life. “She’s been ministering for years, and she’s been preaching the gospel for years. There came a time when she felt there was a calling.”

Her calling as a licensed minister has now been fulfilled.

Rumph said she’s pleased and wouldn’t change a thing about the 10-year process she endured. “I feel elated,” said Rumph, 55. “I’m humbled. If He (God) said it, He will bring it to pass. Just be faithful to God’s word. It’s not in the timing, it’s in the obedience.”

She said Rev. Chaney told her back in 2007 that she would be a trailblazer for women –giving her an amazing prophecy, which has now come to pass.

Back then, he asked her to lead an all-women’s Sunday School class, which she did for a year and a half. She was also in the choir for numerous years. Her education in ministry includes an Associate’s Degree in Ministry from Moody Bible College and a Bachelor of Arts degree in Ministry from Palm Beach Atlantic University.

And now it seems the time has come for her to leap over that big wall as a licensed minister on staff and the first woman ever to do so at the church. “I’m honored and glad that I did sit and wait for it to happen. I was able to be trained. In my waiting, I wasn’t premature,” Rumph said.

Rumph said the women at the church (as well as the men), are delighted for her and for the church.

“Many of the ladies at the church have waited in anticipation for this moment. They are so excited for me. And as for myself – I feel like it’s a dream that I haven’t awakened from,” Rumph said.