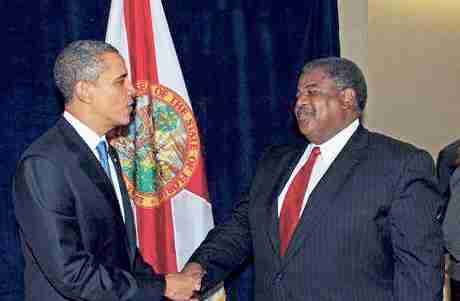 Florida City, Fla. – The next four years will be the ﬁnal run for longtime Florida City Mayor Otis Wallace.

Wallace, the mayor for Florida City since 1984, told his supporters after he was reelected in a runoff election last week, it will be his ﬁnal term in ofﬁce as the top administrator for Miami-Dade’s southernmost city, which has experienced high crime rates and poverty over the years.

Wallace’s long tenure as mayor will come to an end in 2026 because voters supported a city charter change in January to allow the city manager to run the day-to-day operations of Florida City instead of the mayor.

Former Florida City police Sgt. Rocquel McCray, a vocal critic of Wallace, challenged him this year offering a political platform to ﬁx the issues in the city, but the incumbent received 64 percent of the votes in the run-off election.

In a relatively low voter turnout, Wallace, 71, received 532 votes to McCray’s 294, according to the Miami-Dade County Elections Department. Wallace couldn’t be reached for comments after his victory.

McCray, who was on the police force for two decades, stepped into the political arena for the ﬁrst time when she launched her campaign last year in an effort to end Wallace’s 38 years in political ofﬁce.

She took several verbal jabs at Wallace including blaming him for the city’s high poverty rate in which 43 percent of 13,085 residents are living at the poverty line, according to the U.S. Census Bureau report for 2020, while he earns a six-ﬁgure salary. Florida City has a large Black population.

According to the city’s operating budget for 2021-2020, Wallace is earning about $215,000 a year, which makes him among the highest paid mayors in Miami-Dade and Broward Counties.

Wallace earns more than Miami-Dade County Mayor Danielle Levine Cava, who cut her own salary by 20 percent during the COVID-19 pandemic to be ﬁscally conservative with county dollars.

McCray also criticized Wallace for the city’s high crime rates over the years and accused him of political corruption.

According to published reports, the FBI investigated Wallace for a bribery scheme, but he was never charged.

McCray said her law enforcement career was cut short despite a clean record. She said her ﬁght against public corruption within the Florida City Police Department led to her termination and she spoke out against Wallace for giving himself a pay raise when many residents are struggling ﬁnancially.

"The community is looking for a leader to make a change in the community," McCray said. "My opponent has been in ofﬁce for nearly 40 years, and little has changes, outside of the sizeable increase in his salary and personal wealth."

One of McCray’s supporters agreed. "Nothing has been done in this city for 20 years," said Angela Jones, who has lived in Florida City for the past 20 years. "We need a change."

But some residents painted McCray with a corrupt brush as a police ofﬁcer.

During her campaign, several residents launched a website and blog accusing McCray of false arrests, falsifying police reports, violating their civil rights and harassing and stalking them.

"Sgt. McCray ordered me to be falsely arrested violated my rights, stalked and harassed me and illegally evicted me from my apartment," said one resident, who didn’t want to identify herself. "I just want everyone to know about what happened to me. "Sgt. McCray will not be a good ﬁt as mayor for Florida City."

Wallace supporters suggested he led the city’s rebuilding efforts after Hurricane Andrew in 1992 when a lot of people and businesses left the hurricane-ravaged city.

They said thanks to his leadership, more revenues are ﬁlling the city’s coffers each year with new businesses relocating to the city.

“We went through Hurricane Andrew, and everybody left,” said Pamela Davis. “Otis stayed here and helped us rebuild to what it is now. We can’t help that there’s killings, there’s killing everywhere. Bad people with guns kill people, not the mayor.”

Residents also credit Wallace for a major $16.7 million infrastructure project with the Florida Department of Economic Opportunity to ﬁnish phase two of the East Palm Drive and Canal Project which will stop flooding due to torrential downpour.

The project also includes alleviating trafﬁc on East Palm Drive by increasing the four lanes to six and adding sidewalks and bike lanes which will bring more economic development along the corridor.

"I think this project will provide much needed trafﬁc relief in terms of additional lanes of trafﬁc," Wallace said in a statement when he signed the contract in January. "This project was conceived years ago as a way to relieve trafﬁc because of the growth that was coming."

"It was an honor to witness another chapter of history in the making for the great Florida City," McGhee said. "I look forward to working together to continue bringing progress to the great residents of Florida City."

At least one Florida City resident, Mario Arroyo, said he didn’t vote for Wallace because the city has been on the decline for two decades.

"Florida City has been one of the worst cities to live in for the past 20 years," he said. "I couldn’t vote for him again since the proof is in the pudding."