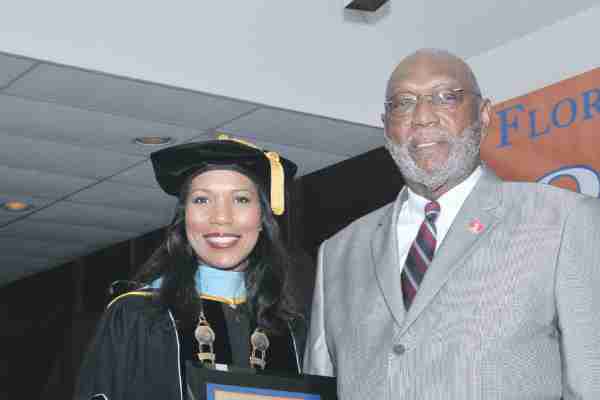 The convocation ceremony held Thursday at the Susie C. Holley Religious Center is the official gathering of FMU freshman, faculty, staff, trustees and alumni. It allows the university and the community at large to welcome freshmen to the North Miami-Dade University. There are 473 members in this year’s freshman class.

Perry, a native of North Carolina, was appointed to Florida’s highest court by then-Gov. Charlie Crist in 2009. Perry holds the distinction of becoming the first African-American appointed to the Eighteenth Judicial Circuit in 2000. Following his appointment to the circuit court bench, Justice Perry ran unopposed to retain his seat.

Justice Perry is the 85th Justice to take office at the Florida Supreme Court since statehood was granted in 1845.

During the convocation, the justice offered words of wisdom to the young men and women.

“Be careful of the people who are around you,” Perry said. “Be mindful of the friends you have. Who is really a friend?”

Perry motioned toward the audience, and spoke about friendships and his inner circle. To illustrate a point, he asked his friends in the audience to stand. Four gentlemen did. All were classmates with Perry at St. Augustine’s College, another HBCU in North Carolina, where he attended undergraduate school.

“I realized about the struggle coming from his day and age, how hard he had to work, and how (when) life throws curve balls, you don’t back down,” Williams said.

He also learned the history of FMU, which dates back to its beginnings in Live Oak, FL, in 1879. The university is South Florida’s only HBCU and is widely recognized as the birthplace of the Negro National Anthem, Lift Ev’ry Voice and Sing.

“I liked the school before I came,” he said. “This added more cool points.”