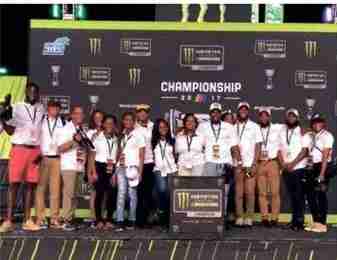 MIAMI GARDENS, Fla. – The Florida Memorial University chapter of the National Association of Black Journalists (NABJ-FMU) has been awarded a $5,000 grant from the NASCAR Foundation.

The grant will help fund broadcast equipment for communication students at the Miami Gardens campus.

“This is the boost my communication program needs to not only purchase new video cameras, but to encourage my students to become excellent, creative journalists,” said Russell Motley, FMU’s broadcast journalism professor and NABJ-FMU’s adviser.

On Nov. 19, in front of thousands of racing fans, NABJ-FMU students were awarded the grant at the start of the Monster Energy NASCAR Cup Series at the HomesteadMiami Speedway.

As part of NASCAR’s diversity program, 18 FMU broadcast students had the opportunity to put their media skills to work at the championship race Nov. 18-19.

“It’s my dream to work behind the scenes in NASCAR’s media department,” said Joseph Ellick, an FMU senior and president of NABJ-FMU. “This experience puts me in the center of all the action at NASCAR. Now it’s time to apply everything I learned in the classroom and prove that I’m ready for the workforce.”

This is the second consecutive year NABJFMU members have been invited to cover NASCAR’s championship race in Homestead.