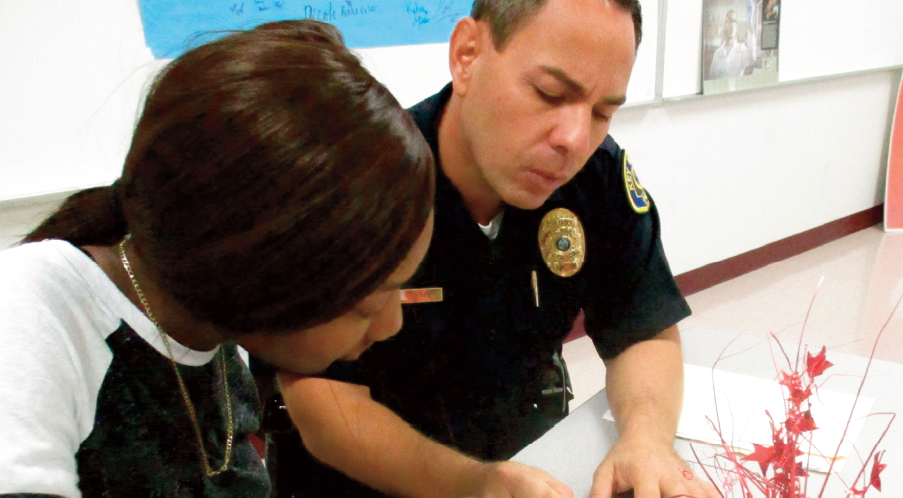 A Key West program is turning around the lives of at-risk youth in the tropical paradise, one student at a time. Keys to be the Change was formed in April 2014, and by helping students to build their self-esteem and self-confidence, the program helps steer them away from drugs and alcohol and to innate leadership skills that they have not yet discovered.

Executive Director, Heidi Golightly, created Keys after a previous program she helped coordinate was essentially dismantled at her request because she was “traveling five miles ahead” of its board of directors.

Her holistic, progressive approach found a home in Keys to be the Change, resulting in a flourishing program that she started with the Key West Police Department that has the support of prominent Key West leaders.

“Now we have the State Attorney’s office, U.S. Coast Guard and Florida Border Patrol,” participating in the program, Golightly shared in a telephone interview.

The comprehensive, multi-faceted agency boasts a 66 percent success rate with its Pathways to Success, a mentoring program that Golightly calls the “flagship” of the organization.

“That’s the key, turn kids around from failing and being truant, to coming to school and realizing that somebody is there for them on a weekly basis.

The “somebody” could be the chief of police or the state attorney. “They have somebody that is looking out for them and caring about their grades,” she shared.

Another of Golightly’s programs involves taking the students to Florida State University each spring for the Peace Jam Leadership Conference. There, they get to “meet a Nobel Laureate and work with that person side by side for the weekend.”

“I like the program. I know that the program has a significantly positive effect on families, especially the youth in our area. The most at-risk youth are now working in a positive way to better the community as well as themselves,” Lopez said.

“Many of the young people that they serve actually come from broken homes or in some cases even no homes. This program is a totally positive thing,” he said.

One of the young people, “Delma Vega…came from Cuba, three years ago and…she didn’t speak a lick of English,” Golightly shared about the participant who is now an honor student, the program’s youth commissioner and “actually spoke for entire group at Peace Jam last year at FSU.”

Kensas Charles is another example of the program’s success.

“He came to us in his sophomore year. He’s been with us for three years,” said Golightly, who added that Charles wrote a brief summary to explain the significance of Keys to be the Change for a grant application. He described how the program’s youth may not be involved in sports or the honor society, but are valuable nonetheless.

Helping students to honor their bodies is another part of Golightly’s agenda.

“We run the farm to school program in elementary schools and it’s starting at Key West High School. We teach…how growing their own food and developing healthy eating habits is a concept that will hopefully prevent them from doing drugs and alcohol,” she explained.

Golightly says the essence of the program is about helping students to embrace their worth because when they do, abusing illicit substances becomes less appealing.

“Everybody’s telling kids don’t do drugs and alcohol. What we do instead, we try to build their self-esteem, build their self- confidence and let them know that they are important in this world,” she said. “They can be the change they wish to see.”