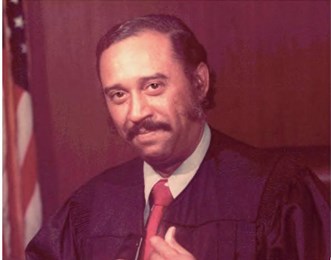 Judge Edward Rodgers, Sr., who died Oct. 20 at the age of 91, left a rich legacy in the legal and judicial world and throughout the broader world. Among his countless examples of public service, he became the first African-American judge in Palm Beach County, blazing a trail for upcoming black lawyers.

Now his legacy will live on even more strongly in Riviera Beach, the city that was his home.

The ribbon cutting ceremony for the new Judge Edward Rodgers Center for Community Development was held Dec. 15 in Riviera, with more than 100 wellwishers gathered to mark the momentous occasion despite the slightly overcast morning weather.

The center will be run by Judge Rodgers’ beloved fraternity, the Delta Delta Lambda Chapter of Alpha Phi Alpha Fraternity of Palm Beach County and their Alpha Educational Foundation. He was an Alpha for seven decades.

The center will house various community organizations, non-profits and businesses that help provide needed resources for the city residents and others.

The facility was something the judge wanted to see happen before his death.

He petitioned the Riviera Beach City Council to place a community resource center in the building that was once the Maritime Academy, a charter school focused on marine life and development.

The school was the brainchild of the Viking Yacht Company, which has partnered with the city on various marine projects including the newly developed Riviera Beach Marina Village. Viking Yachts donated the Rodgers Center buildings to the Alpha Educational Foundation, which now owns the building and leases the land from the city.

Rodgers’ Alpha brothers were delighted to see the project to fruition after his death.

“This has been years and years in the making,” said Alfred J. Fields, president of the fraternity chapter and the foundation. “Judge Rodgers had been looking for a place from which we could continue the community service work he, and our brothers, have been doing. Now, we’re here. I just wish he was too.”

Morris Bell, immediate past president of the chapter and currently incoming vice president of the Alpha Educational Foundation, said it’s all a tremendous blessing. “There is a God that sits high and looks low,” he told the crowd in his remarks.

Rodgers’ son, Edward Rodgers, Jr., was on hand for the ceremony and said the project was fitting for his father, who was a pioneer in the judicial world and also a staunch community advocate.

“I’d like to thank everyone who’s been so focused on getting this done,” he said. “My father wanted this to be a place of opportunity for Riviera Beach.

Dona Jones, staff assistant to U.S. Rep. Alcee Hastings, was present representing the congressman. “It’s important for the community to assist with the needs of the community,” said Jones. “Representative Hastings is pleased to see this center open and serving the community.”

Hastings and Judge Rodgers were longtime friends, and Hastings spoke fondly of the judge at his funeral just months earlier.

It was Hastings who sponsored the bill placing Rodger’s name on the U.S. Post Office on Blue Heron Boulevard in Riviera that was dedicated in 2004.

Riviera Beach Councilwoman Lynne Hubbard was instrumental in getting the City Council to get on board with the project. She had the item placed on the agenda and led the charge to allow the Alphas to take it on.

The council eventually voted “yes” on the project.

“We know what’s best for our city and community,” said Hubbard. “It’s important knowing that viable nonprofits and social organizations will be here (located in the center).”

Two of the nonprofits that will be housed in the center include “Thrive for a Change,” an organization that assists ex-offenders in getting back on their feet and getting jobs; and Suits for Seniors, an organization that takes high school male seniors through a life skills program and then outfits them with a free tailored suit.

Jervonte Edmonds, founder and CEO of Suits for Seniors, said the organization will offer expanded services now that they are housed in the center. They will no longer just service high school seniors, but will now provide services for any male, any age group, from low-income families. They will help update clients’ resume and skills such as interviewing and job-readiness, then give the men a free tailored suit. Retired educators and professionals will work on a volunteer basis to assist the clients. “We’ll have them perfectly ready to get a job!” said Edmonds.

The Judge Edward Rodgers Center for Community Development will be fully operational sometime during the new year. For more information contact Alfred Fields, president, at 561-627-3089, or ajfields0102@gmail.com.

Previous post Master of art of making a profit