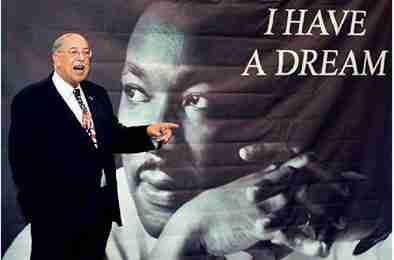 Speaking before a packed crowd Friday night, Jan. 19 at the Riviera Beach Marina Event Center for the city’s Dr. Martin Luther King Gala, Honore told the crowd that many former and current troops come from those “sh–hole” countries the president referred to, when he asked why we receive immigrants from such countries. Honore said everyone should be proud of those soldiers and their service.

Honore, who is often featured on CNN for restoring order and peace after natural disasters and riots, was the keynote speaker at the MLK Gala, and although he touched on current events such as Trump’s remarks and even the Me, Too movement for women, his main theme for the night was the need for education–specifically learning to read.

Even at his Honore Center for Undergraduate Student Achievement in Louisiana, a program to foster higher education in males , graduates are mandated to become a classroom teacher for two years.

“If we get our education, we could be anything!” he said in a loud, bolstering tone. “Our challenge today is to get our young people to appreciate the opportunity they have!”

Honore left no stones unturned when he spoke of education. He even challenged the audience. “When was the last time you told your child to read a couple of pages to you?

Go home, get them out of that bed and tell them to read to you! Too many of our youth who can’t read end up in the contraband society. If your children and grandchildren tell you they want something –tell them ‘ok,’ but first read me a couple of pages!” he admonished.

He recounted the correlation between incarceration and the lack of education. “The ones who end up incarcerated can’t read. We don’t have a segregation problem, we have an education problem. If you can’t read, you can’t navigate,” he stated.

Honore is a retired Lieutenant General who served as the 33rd commanding general of the U.S. First Army at Fort Gillem, Georgia. But he is most known for being the no-holds barred commander, bringing order after Hurricane Katrina. On August 31, 2005, Honoré was designated commander of Joint Task Force Katrina responsible for coordinating military relief efforts for Hurricane Katrina-affected areas across the Gulf Coast. Honoré’s arrival in New Orleans came after what was widely believed to be a poor performance by the state and local agencies, the Federal Emergency Management Agency (FEMA) and its director Michael D. Brown. Honore gained media celebrity and accolades for his apparent turning around of the situation in the city as well as his gruff man agement style which contrasted with what many felt were the empty platitudes of civilian officials.

“We need to act like this battle is depending on us…individually. We can’t go back. We won’t go back. Each one of us has to figure out how we’re going to make a difference.

Your mission starts right here –on this block, in your family. The government is not good enough to do this. If it was, it would’ve been done already. Now is time to act,” he said in closing, “but now we need you to act. And you don’t need to go far. Start right here where you are.”

He also congratulated women for speaking out against sexual harassment.