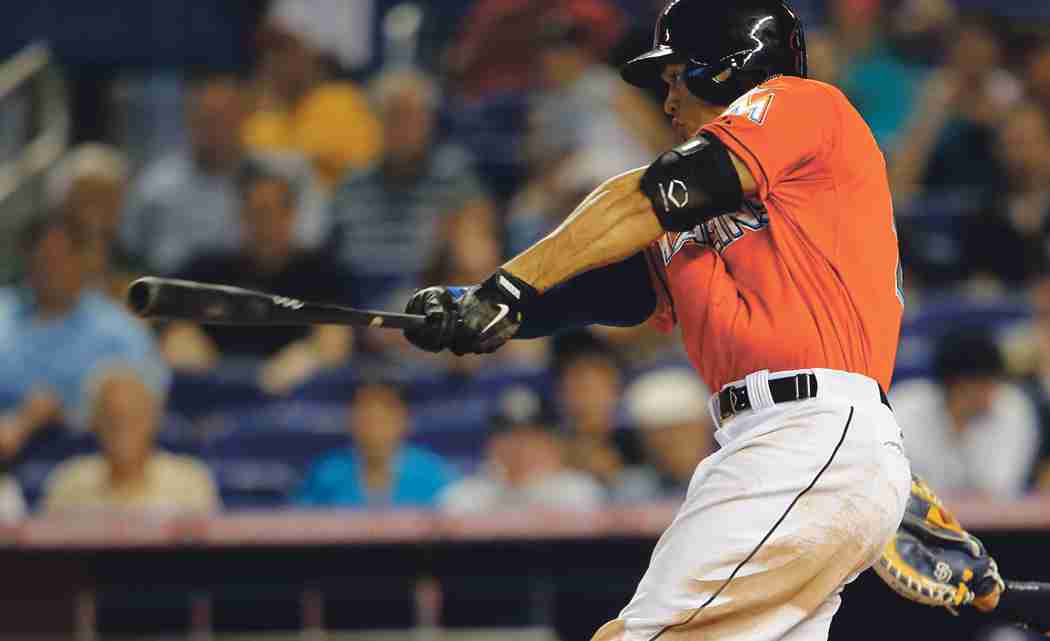 MIAMI, FL — Miami Marlins right fielder Giancarlo Stanton was named winner of the 2014 Hank Aaron Award for the National League and is also in the running for the league’s MVP.  The Hank Aaron award is given to the best offensive player in the majors for each respective league. Center fielder Mike Trout, of the Los Angeles Angels, won the award this year for the American League.  Stanton, a two-time All Star player (2012 and 2014), hit 37 home runs this season and 105 runs batted in (RBIs), as well as having a .288 batting average, according to ESPN.go.com.

Baseball legend Hank Aaron, now a Palm Beach County resident, was on hand this year at the World Series to personally present Stanton with the award.

The Hank Aaron Award was established in 1999 to honor the 25th anniversary of Aaron breaking George Herman “Babe” Ruth Jr.’s career homerun record.  At a press conference Stanton said that it was a tremendous honor to receive the award and represent Aaron’s legacy in this modern day of baseball at the 2014 World Series.  “The person you are is bigger than the person you are on the baseball field,” Stanton said.  “In addition to the performance and all that, reflecting on what type of person Hank was, it is an even greater accomplishment to be in the same category (as Aaron) for me.”

Michael Hill, Miami Marlins president of baseball operations, said that Stanton having a healthy year on the field made all the difference.  “Every award is a result of him being healthy, finally,” Hill said.  “He’s battled various injuries over the years.  So he put in a healthy year, at least until the end of the year when he got hit in the face.”

Stanton, who celebrated his 25th birthday Saturday, Nov. 8, led the NL with 37 homeruns and 105 RBIs when he was hit in the face by a wild pitch from Milwaukee Brewers pitcher Mike Fiers on Sept. 11, which effectively sidelined the powerhouse hitter for the remainder of the 2014 season.  Reportedly, five teeth needed to be fixed or replaced, and a procedure to assess how much blood remained in Stanton’s sinus cavity was also performed.  Now that the injuries have mostly healed, Hill said that Stanton looks great, and the talented outfielder says that he feels great and is ready to start his off-season program shortly.  “He’s good.  He took a European trip at the end of the year of the regular season, just trying to relax and get away from it a little bit,” Hill said.  “But (Giancarlo) is back now and the fractures in his face are healing.  His teeth have been fixed and you can’t even see anything around his lip where there was a cut earlier.”

In addition to the Hank Aaron Award, Stanton is also in the running for the National League’s MVP award, along with other front runners including Los Angeles Dodgers pitcher Clayton Kershaw and Pittsburgh Pirates outfielder Andrew McCutchen.  Hill said that Stanton is definitely his pick for MVP because of his work ethic and contributions to the cohesiveness of the team.  “(Giancarlo) is an extremely dedicated young man who wants to be the best, wants to strive to be the best.  And will put in whatever work is necessary for him to be the best,” he said.  “I think for what he means to the Miami Marlins and our lineup and our team and the unity, he’s definitely my most valuable player.”

Stanton has garnered several post-season accolades including being named the National League winner of the 2014 Louisville Silver Slugger Award at his position.  This is the first Silver Slugger award for the right fielder.  In good company, Stanton joins other Marlins including Gary Sheffield, Mike Lowell, Miguel Cabrera, Hanley Ramirez and Dan Uggla that have won the Silver Slugger award, according to the Marlins website.

Stanton made his major league debut June 8, 2010 at age 20.  Former major league outfielder and Hall of Famer Andre the “Hawk” Dawson said the following year that he predicted the young slugger would average 30 home runs per season.  Dawson, who is special assistant to the Marlins president, has mentored Stanton since the beginning of his career with the franchise.  Lending credence to Dawson’s prediction, Stanton has 154 career home runs to date.

The long-term plans for Stanton is to play with the Miami Marlins, according to Hill, which could lead to a very lucrative contract for the MVP hopeful.  “We have reached out to his representatives and are hoping to engage in long-term discussions,” he said.  “We definitely know we control him for the next two years and we’re hopeful that it will be for many years beyond that.”

Stanton’s on the field contributions may be key to the future success of the franchise.  Hill said that he thinks Stanton can effect the game in many different ways either with defense, offense or his home run power and all around game.  “Giancarlo is a tremendous talent.  He’s a perennial MVP candidate,” he said.  “I’m just happy that he was able to stay on the field because when he is on the field, he’s a difference maker.”