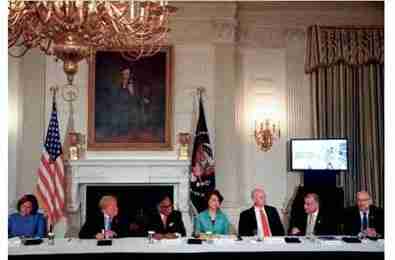 During the President’s unveiling of his proposed Infrastructure and Transportation Plan, Chairman Bovo expressed the need to deliver the Miami SMART Plan to expand rapid transit throughout Miami-Dade County in order to get our residents out of gridlock.

The SMART Plan is an infrastructure investment program of projects to improve transportation in MiamiDade County.

The Miami-Dade County Commission on Feb. 6 gave final approval to an ordinance to create a funding source for the SMART Plan to expand rapid transit. Bovo was the ordinance’s prime sponsor.

“I think about the residents of our community, the labor force, who struggle each day to make their daily commutes,” said Bovo. “We are working aggressively to make the Miami SMART Plan a reality. We recently passed TIF [Tax Increment Financing] legislation that encourages transit-oriented development along the proposed corridors. This type of policy change alongside a strong local, state, and federal funding commitment will allow Miami-Dade County to deliver not only new transit options but address issues related to workforce housing and resiliency.”

The President gave his commitment to helping Miami-Dade through the federal regulatory process that includes environmental both and transportation permits, which historically have caused major delays.

It wasn’t Bovo’s first trip to the nation’s capital about the SMART Plan. He visited in July to discuss Miami- SMART Plan with members of Congress and Department heads, including Congressman Mario Diaz-Balart and Labor Secretary Alexander Acosta. President Donald Trump’s longawaited infrastructure plan calls for giving government agencies the authority to sell off airports, roads and other federal assets.

The president is calling for divesting assets when federal agencies can show the sale would “optimize taxpayer value.”

The proposal lists Ronald Reagan Washington National Airport and Dulles International Airport as examples of the types of assets that could meet the criteria. Both are located in Virginia.

Trump is also citing two major roadways in the Washington D.C. region that could be sold: the George Washington Memorial and Baltimore-Washington parkways. The National Park Service maintains both.

The president’s plan said the federal government owns and operates certain infrastructure that would be more appropriately owned by the private sector or by states and municipalities.

Trump’s infrastructure proposal get said that agencies selling federal property would have to show how the proceeds would be spent, identify the appropriate conditions under which sales could be made, and conduct an analysis showing the increase in value that resulted from the divestiture.

Next post Black homes in Miami to host Airbnb guests

Previous post Stop allowing these punks to lead us!