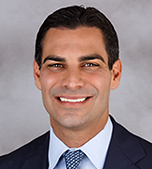 MIAMI – Representatives of world governments and institutions will converge on Miami to consider the goal of achieving global happiness. An organization of Miami Mayor Francis Suarez and the former President of Mexico Vicente Fox will join Dr. Eduardo J. Padrón, President of Miami Dade College (MDC) at the H20 Government Track, the official launch of the World Happiness Summit on Thursday, March 15, from 8:45 a.m. – 3:30 p.m., at MDC’s Wolfson Campus in downtown Miami. The event is by invitation only and open to the working media.

Participants in the H20 government track summit will include representatives from more than 40 nations in a roundtable discussion that unites global government leaders, economists, academics and researchers to focus on improving the well-being of societies and nations.

The H20 gathering ambitiously focuses on raising the global quotient of happiness, which makes Miami an appropriate host city of the event. The city is preeminent as a Gateway to the Americas, the No. 2 start-up city by the Kauffman Index and the No. 1 happiest place to work according to Forbes.

President Padrón will welcome participants from 8:45 a.m. – 9:15 a.m. and Mayor Suarez will share some of the city’s sustainability initiatives toward supporting the happiness and well-being of residents from 9:15 a.m. – 10:45 a.m. During the keynote address at 1:30 p.m., President Fox will share the importance of compassionate leadership for a sustainable future.