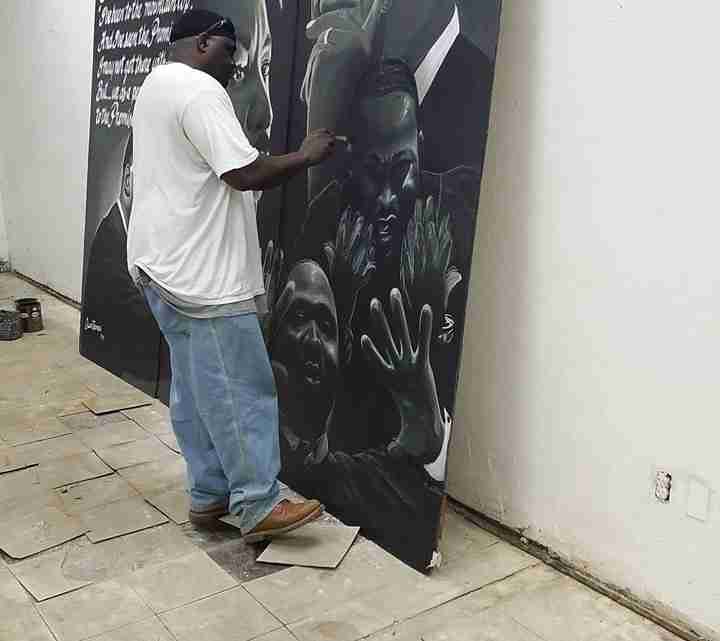 In addition to the mural unveiling, the MLK EDC will showcase the work of Addonis Parker with a pop up gallery of his most recent work including the recent painting 3 Kings or “Amir,” which was unveiled at the #BankBlack event at OneUnited Bank, the largest Black owned bank in the country. The gallery will include new work by Parker that will be available for acquisition.

“We are very excited to unveil this contribution to public art in Miami with our iconic new mural of Martin Luther King Jr,” said Christine King, Executive Director of MLK EDC. “We are pleased to have Addonis Parker’s studio as part of the MLK Business Center.”

The free community event will include the pop up gallery, refreshments and live entertainment including acclaimed musician John Saxx. The Board of Directors for MLK EDC and the artists will be available to celebrate and share their work with the community.

“I’m very excited to unveil the new MLK Jr. mural,” Parker said. “I’m honored to be asked to replace this historic mural and work by the late Oscar Thomas (1956-1997). I have been inspired by this legendary artist and the work of Martin Luther King Jr. I believe the new mural will positively represent the legacy of both men.”

President and COO of OneUnited Bank, Teri Williams said they were happy to support Parker and the MLK EDC.

“We are a proud sponsor of this community event and support the work of the MLK Economic Development Corporation and the artist, Addonis Parker. Mr. Parker’s work represents the #BankBlack Movement including Mona and Amir.”

Parker, who was nicknamed “Giant” as a child for his now 6’8″

frame, is a kind and gentle artist, father and community man. He attended Brevard Community College in Florida majoring in Art and Computer Science and Morris Brown College in Atlanta, Georgia. He has been involved in after-school and community based art programs for inner city youth throughout Miami. His work includes murals throughout Miami, including Thunder & Enlightening at OneUnited Bank and a tribute to Purvis Young in Overtown.