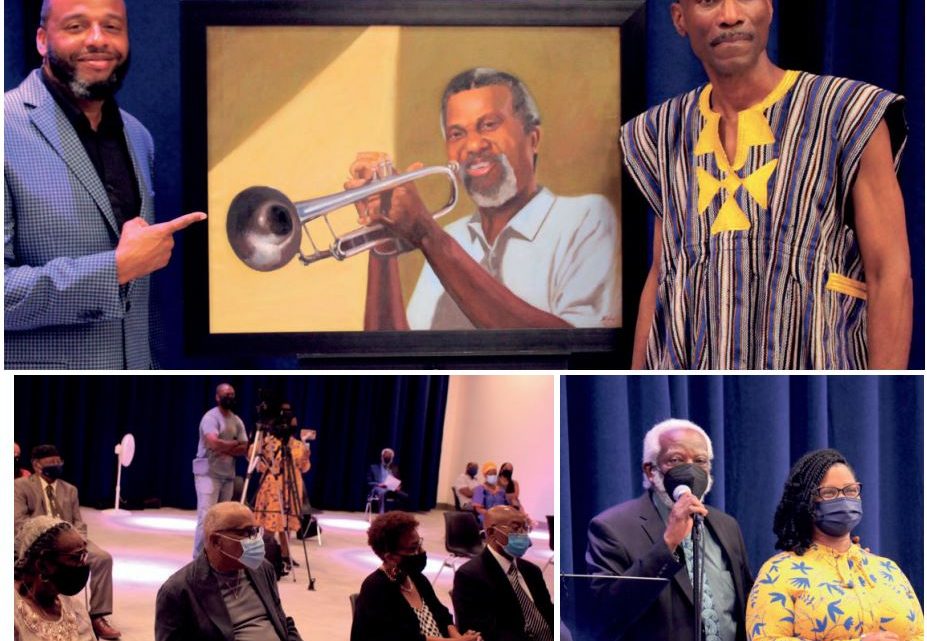 MIAMI Fla. – Admiring his father’s portrait (top left) painted by Miami artist Nana (top right), is Melton Mustafa Jr., during the unveiling ceremony at the African American Cultural Arts Center in Liberty City on Friday, April 2, and renaming of the center’s newly refurbished music hall in honor of the late Jazz great who was so devoted to the youths there. The family and friends present included his brother Jesse Jones Jr., (above center), also a virtuoso musician. “To have my dad’s name on this facility, on the walls, is tremendous, because he really cared,” the son said. Whether returning from recording or from a concert tour, he added, “He still would come back here, and share his gift with the community.” Nana the artist said Mustafa “was a dear friend of mine, and I considered it a great honor to have painted him,” adding, “When I started painting this picture, I totally immersed myself in his music.” Marshall Davis (above right), the center’s managing director, graciously thanked the family “for letting us name this facility for Melton Mustafa.” He acknowledged Isis Roberts (far right), a key administrator, and said “she’s going to continue the vision” and high standards that Mustafa and she had set. “Melton left us so many wonderful memories,” Davis added, particularly as a role model. He asked the audience to “Think about how you can be a role model, and not look at salary, but look at the results of your work.”