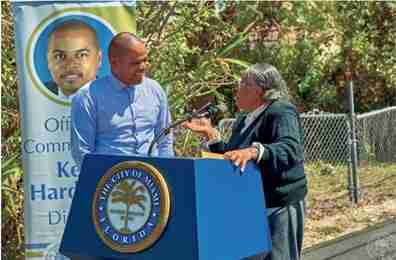 PHOTO COURTESY OF CITY OF MIAMI

MIAMI- For years, the alleyways adjacent to homes in the Liberty City, Buena Vista and Wynwood communities were a nuisance to residents because they served as a dumping ground for trash, a haven for criminal activity and a habitat for pesky rodents.

On March 23, Miami Commission Chairman Keon Hardemon was joined by city officials and residents for the ribbon cutting ceremony for his newest quality-of-life project; the District Five Alleyway Improvement Initiative. The $2.7 million investment entails the rehabilitation of 52 alleyways; including cutting back years of overgrown shrubbery, repaving asphalt, installation of speed-bumps, markers, and LED lighting.

The improvements re-purpose the use of the alleyways as bike paths, an auxiliary road and alternative walking paths. The ribbon cutting debuted the first phase of the project; which Hardemon plans to expand to other parts of the district.

The improved alleyways are abutting homes on the streets listed below:

Next post Sherdavia Jenkins would have been 21-years old