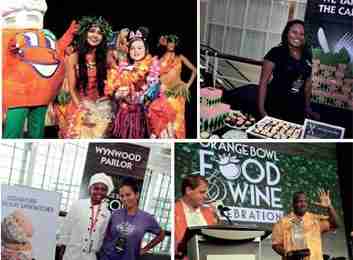 Top left: Antonella’s wishes to meet Disney princess Moana and go to a Hawaii resort with her family were granted at the Orange Bowl’s Food and Wine Celebration. Top right and bottom left: Food vendors from across South Florida were present at the event. Bottom right: Johny Alexander, right, was recognized by the Orange Bowl for his commitment to youth sports in South Florida.

More than 1,000 tickets were sold – the most ever for the event – in support of these organizations and for patrons to enjoy a night of extraordinary food and entertainment.

Over the years, the Orange Bowl has been able to invest millions of dollars in the South Florida community through its four pillars of community outreach: youth sports, fundraising and community events, academic programs and scholarships and legacy gifts.

The Orange Bowl Committee and Make-A-Wish Southern Florida surprised 6-year old “Wish Kid” Antonella by bringing her on stage to be greeted by Hawaiian dancers and a lookalike Moana, Antonella’s favorite Disney princess. She was then told that her wish to go with her family to Disney Aulani Resort in Hawaii has been granted.

Johnny Alexander was recognized for the significant impact he has made in the community with the Orange Bowl Keith Tribble Community Service Excellence Award. Johnny Alexander has been involved with youth sports in the Fort Lauderdale area for nearly 50 years, including 40 with the city’s Parks and Recreation Department.

His guidance and dedication have resulted in many great athletes from the South Florida area excelling at the collegiate and professional level. Alexander is a graduate of Dillard High School where he served as captain of the baseball, basketball, football and track and field squads. Among his many awards, he has been enshrined in the Florida Track & Field Hall of Fame.

The highly acclaimed executive chef of Artisan Beach House, Paula DaSilva, who was the runner up on season five of Hell’s Kitchen, served as celebrity chef.

The evening was hosted by Lisa Petrillo, the Entertainment and Lifestyle Reporter for WFOR, CBS4 in Miami. Benn served as judges’ captain.