Organizations celebrate Siblings Day by giving back to community 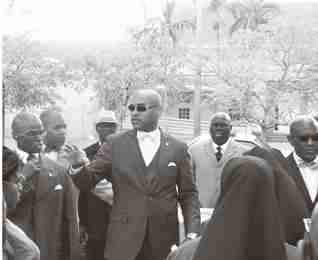 MIAMI -Save the Kids, Probation Station, the Nation of Islam and Make the Homeless Smile gathered at Liberty Square and invited the community to eat as they promoted a message of peace in the community.

Liberty Square, known as the Pork & Beans, is a 753-unit Miami-Dade public housing apartment complex that has been plagued by crime and poverty. As one of Miami’s oldest housing projects, the consortium felt it was important to feed the people of Liberty City because it is amongst the most neglected in Miami.

David Micheal, the organizer and member of Save the Kids, said distributing food to the people is an act of love.

“We want to show the people that we care by being active and engaged in the community,” said Micheal.

As the evening lapsed, the gathering at Liberty Square resembled a huge family reunion. They played football. They discussed ideas. They posed for pictures. And they ate. “It very important that we come where the crime is because these are the people that need our support the most,” said Emmanuel George of the Roots Collective. “And we can’t be scared to go there because then our work is not genuine.” Residents also expressed their discontent at the proposed “Liberty City Rising” renovation of the complex, citing that it is but a means to expel them from the property. They plan to assemble at the public hearing of the Economic Prosperity Committee (EPC) meeting on April 14, to express their frustration. Nearly 80 people were fed, according to Valencia Gunder, a local activist and member of Make the Homeless Smile. They hope to continue feeding the community once or twice a month.

This initiative was made possible by the contribution of the groups and by Michelle-Spence Jones, former City of Miami Commissioner.