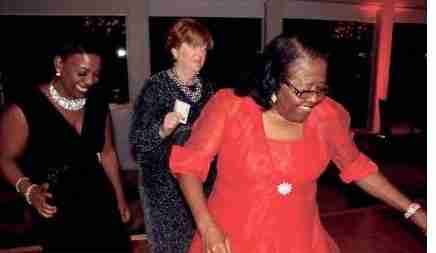 PALM BEACH GARDENS, Fla. – It was a night fit for a queen! The “Queen of Technology,” Estella Pyfrom, founder and proprietor of Estella’s Brilliant Bus, a high tech computer lab on wheels, celebrated her 80th birthday, her top tier business and the unveiling of her book cover –all in one amazing night on December 3 at the posh Eastpointe Country Club in Palm Beach Gardens!

Several hundred well- wishers gathered for the festive occasion, which featured speakers including business partners, gospel singers, esteemed musicians, a representative from Kenya and even a friend of President Barack Obama!

The gala was planned by her family, and the Master of Ceremonies was her highly acclaimed son, Colonel Juan Pyfrom, attorney, who flew in from Japan to help honor his mother. Her other children, Mia, Gene and Dr. Karen Abrams, all of whom are also highly successful, sat at the head table along with her husband Willie, who is a successful musician and former longtime music teacher. He serenaded her all night long with his trumpet.

“She knew I would do something –but I don’t think she knew I’d do as many songs serenading her,” Willie said of his bride of more than 50 years. He recalled many defining moments in their lives, such as when they first met and when he sadly flew off to Korea for military duty, leaving her behind at the airport. His moving tributes to her left many audience members wiping their eyes. Willie said it was Estella’s first ever birthday party and it went off beautifully. He couldn’t have been more happy for his lovely lady, he said, having participated in planning the party and assuring that every detail of the night was spectacular.

When his wife took the podium later in the night, she told him he still has that magic touch. She was thrilled by his musical tributes because a few years ago he was on the brink of death after an accident. “To God be the glory!” she said, exclaiming his miraculous survival.

The Pyfroms grew up with humble beginnings, but went on to amass great success in life. Together, they have been to the White House, greeted by President Barack and Michelle Obama as well as George H.W. Bush and wife, Barbara Bush.

Estella has been featured on countless TV programs, including being honored as a CNN Hero, by CNN host Anderson Cooper. She has also been featured in a Super Bowl commercial for Microsoft Corporation. Her accolades are too many to list, but among her loyal supporters is Oprah Winfrey, who honored her for her Brilliant Bus, as well as wrote about her in her magazine, “O, the Oprah Magazine.” Winfrey also doled out a sizable check to support Estella’s organization.

But despite massive success, her son Juan says she remains humble.

“She’s so humble because she hasn’t forgotten where she came from. All of us in the world are just one bad thing happening to us that can throw us back into poverty. She is amazing and has lived life with enthusiasm, intellect and humility,” said Juan Pyfrom.

When I first read about the virtuous woman in the book of Proverbs in the Bible –that defined my mother.” she said.

In fact, there was a moment in the night, that felt like church.

Estella had asked a dear friend, minister and singer, Willie Lawrence, to sing her favorite song, “To God Be the Glory.” Lawrence literally brought the crowd to their feet with his rendition of the song. Worship broke out in the ballroom leaving Estella with her hands in the air in praise. It was a poignant moment that signaled that special connection that daughter Mia spoke of.

Another defining moment of the evening was the unveiling of the cover of Estella’s first book, “The Legacy of a Humble Black Woman: From Fields to Factory to Estella’s Brilliant Bus.” Pyfrom’s literary coach, Kandra Albury, whom helped her with her autobiography, said Pyfrom was most authentic in her writings in her book. “Her stories were amazing,” said Albury. ” She has done so much in her lifetime, so I encouraged her to tell all of her stories in the book. She has so much to share. She is such an inspiration and her story will inspire so many,” said Albury.

You can visit Estella’s website, estellasbrilliantbus.org to purchase the book.

Another special guest who sang Estella’s praises during the ceremony was Debbie Cohn, a songwriter, playwright, poet and humanitarian, who is also a personal friend of President Barack Obama.

Cohn has been in Estella’s corner since they met and considers her a friend and an inspiration. She was the first of the night’s featured speakers who wrote and dedicated a spectacular poem to Pyfrom. She has also featured Pyfrom in some of her works, having been inspired by Nelson Mandela and Mother Teresa, among others.

Pyfrom was astounded at the end of the night. “I am almost in tears to see so many people come out in support of me. I’m so thankful to the ‘Brilliant Bus’ partners and people –many of whom I didn’t even know five years ago. I thank God for all of them, and for so many of my former students, who are now full grown adults! It’s been an amazing night!”

Her son, Gene Pyfrom, also said it was an honor to celebrate his mother, and her daughter, Dr. Karen Abrams, a Palm Beach County school principal, said the night clearly belonged to one amazing lady! “She’s enjoying it. It’s wonderful to see her so happy. Look at her out there on the dance floor! She seems pleased!”

And indeed Pyfrom was pleased! At the end of the night, she quoted her favorite song, “To God be the Glory!”

Next post Family and friends gather for Reno’s memorial