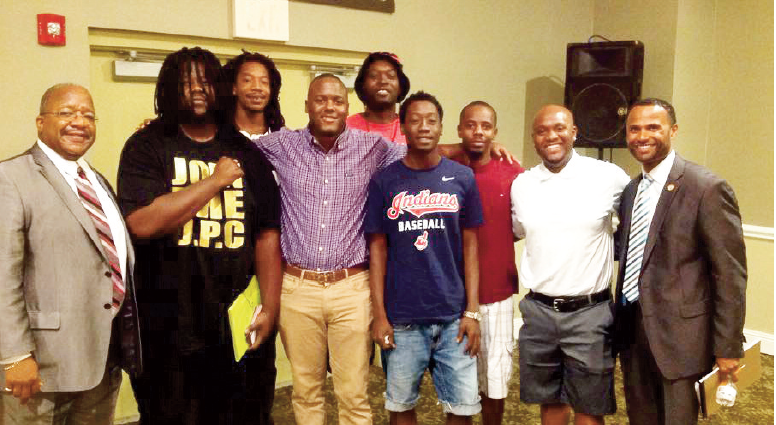 PALM BEACH – Mention of Dunbar Village in West Palm Beach usually brings to mind the heinous 2007 gang rape and forced incest between a mother and her son by ten masked intruders. If that ghastly crime is representative of Dunbar Village’s darkness, Ricky Aiken’s life represents the community’s light.

Aiken, 27, said he grew up with some of the defendants of the crime which garnered national news coverage and resulted in lengthy prison sentences for most of the assailants.

His childhood was similar to the backgrounds revealed about some of the young black men convicted in the gang rape. Raised in poverty, fatherless, with an absent, drug addicted mother; Aiken’s alcoholic grandmother was his caretaker and her addiction often meant weeks-long drinking binges that resulted in him being neglected, emotionally abused and “pretty much left to fend for myself.”

His already troubled life spiraled even further downward after the death of his grandmother.

“I was living with my mother…in a shed behind an abandoned house. I didn’t feel I could keep going to school because I needed to do something to survive, so I started selling drugs at higher rate than before,” following the criminal footsteps of his two older brothers. “I was awaiting the time that I could sell drugs like my older brothers because that’s all I knew.”

What he knows today is something entirely different.

The opportunity to take a less traveled road emerged when Aiken connected with mentors at the Urban Youth Impact’s summer youth program.

“Being around people who weren’t from my community showed me a different side to life,” he shared.

It was also around that time that he met the people who would become his godparents, Michael and Michelle Newsome, his first exposure to a married, African-American couple. Living with the Newsomes provided Aikens the stability to obtain his GED and complete EMT school.

Although his purpose for completing EMT school was to pursue his dream career of being a fireman, he changed him mind about extinguishing fires when a fire within him was ignited.

“I kind of got a heart for my community.” He also started to wonder why other young men were not afforded the same opportunities that he had. Thoughts of relocating became unappealing.

“It became less about me leaving and pursing my own dreams and more about me staying and doing whatever I could to help my community, especially the young men.”

Since then, he has been deliberate about the jobs he accepted; Salvation Army Community Center, Urban Youth Impact and currently at the Children’s Home Society’s Safe Harbor, an emergency shelter for teens.

Aikens created the Inner City Innovators last summer; a movement to expand on his intention.

“My heart behind it was to provide indigenous leadership and innovative, yet collaborative solutions to the problems facing the inner city,” explained Aikens, who meets with six young men at least weekly to teach them to adjust how they view their life circumstances.

“Most young people looking at their home environment, most of them see it as a struggle to overcome insurmountable odds, and so that pressure leads them into making wrong life choices and getting mixed up in things that they shouldn’t be involved in.” Aikens says he teaches the boys to see the negative social indicators in their lives as opportunities to develop resilience, become stronger and emerge as community leaders.

“I teach them how to frame what they’re going through since I’ve gone through it myself,” he shared.

Mervin Davis, 17, a member of Inner City Innovators, called Aikens a “good dude.” He said he’s always wanted to go to college but working with Aikens has motivated him even more. “He helps us to see yourself a couple of years from now,” said Davis.

Aikens’ work has been bittersweet.

The bitter: One of the young men with whom he worked, Johnny Davis, was gunned down last year in broad daylight after leaving a community forum. Davis’ death added a sense of urgency to Aikens’ work.

“As long as they’re alive, they have the chance to get their lives back on track. Once a man is dead, that opportunity is taken away from him.”

The sweet: His family has been transformed.

“My mother has been clean for five years. My little brother is the starting shooting guard at University of Cincinnati and will be the first of my mother’s children to receive a full college education. Every little cousin born after me …is in college or on track to graduate. My family has been totally transformed by the life decision that I made early. My family is an example of what can be for every family here,” Aikens said.

It’s an example he wants to illuminate on a larger scale. To that end, Aikens has entered the race to become District 1 city commissioner.

Previous post I touched a snake and I liked it