Riviera Beach on the move 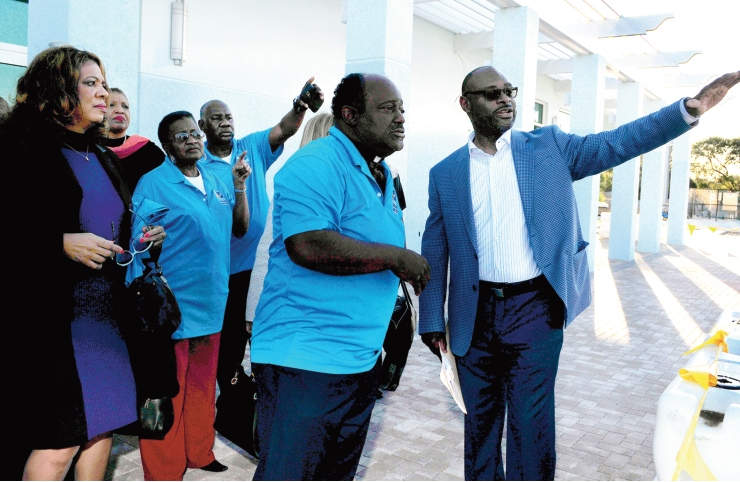 RIVIERA BEACH, Fla. – One by one current and former Riviera Beach city officials tossed a coin into the fountain and made a wish outside the newly created Riviera Beach Marina Village on Feb 25. Hundreds gathered for the ribbon cutting ceremony marking the occasion that was nearly ten years in the making. But finally the council members claimed victory after years of legal wrangling, opposition and squabbling over whether or not there should be redevelopment at the city’s prime waterfront spot

The 23- acre Riviera Beach Marina Village is set to transform a predominantly black city that was once known for its crime, but now will be a world-class destination for events, recreation and water sports including deep-sea fishing, scuba diving, snorkeling, paddle boarding, kayaking and boating. It’s a day the city’s Community Redevelopment Agency (CRA) and its city council, have envisioned for years.

“Today we make history! For years, there was a lack of consensus on what to do with the marina,” said council chairwoman Dawn Pardo.

“This is now a symbol of what we have become as a city,” said Pardo. “Today the city of Riviera Beach is making history and you are here with us,” she told the large crowd that gathered outside of the newly built building which sits on the waterfront.

Vice-chair of the council, Terence “T.D.” Davis, said greatness is emerging in the city of just over 30,000 residents. “Despite what’s going on across this nation, it’s a very beautiful day in Riviera Beach. Today you are starting to see greatness,” said Davis.

The new Riviera Beach Marina Village, with a public investment of approximately $35 million, boasts a new Marina Event Center, Bicentennial Park, restaurants, events and water sports. The Marina Event Center, which is the main building, will feature a main ballroom called “Newcomb Hall,” plus two smaller meeting rooms which will hold from 10-300 guests. The center will host weddings, family reunions, celebrations, corporate meetings, business groups, fishing tournaments, as well as community groups and clubs. Tropical Shipping is sponsoring the first ever permanent exhibit showcasing the history of Riviera Beach including artifacts, personal accounts and   pictures. The Event Center will also host a two-story restaurant with both indoor and outdoor seating. There will also be a cafe and a rooftop patio with a spectacular view, overlooking the Intracoastal Waterway, Peanut Island and the ocean.

Bicentennial Park will have $4 million in improvements and will have a covered pavilion with a refreshment stand, a stage area and grand lawn for concerts and events. Weekly, monthly and annual events are being planned. There is also an interactive splash fountain for the kids.

Future plans include a “Restaurant Row,” a public market, and a mixed-use building with hotel, parking, offices and retail shops.

It took the city years of wrangling with opposition groups to get to this point of development. Opposing factions filed various lawsuits to prevent redevelopment of the city’s marina because they feared the development would not include or benefit some of the city’s lower income residents –or the “common man.” These opposing groups insisted only “big business” would benefit from the city’s marina. But proponents of the development said, it would be a huge boost to local residents and there would be something for all residents to enjoy. In the end, the city’s residents, who are mostly black, voted for redevelopment. Councilman Bruce Guyton, was among those leading the charge for redevelopment of the marina because of its economic impact. “We had a long journey but we didn’t quit. We understood that this meant a lot to the future of our economy,” said Guyton. “I see prosperous things for our city.”

Mayor Thomas Masters said the city owes a debt of gratitude to the CRA Executive Director, Tony Brown, who was the mastermind behind bringing the project to fruition. “The man responsible for the leadership of this building, is Tony Brown,” said Masters, with Brown standing by his side at the podium. Masters pointed out that Brown had his share of dissidents, and while he and Brown may not always agree – he is always there to lend his support to Brown and the CRA. Brown agreed. Masters said Brown’s achievement is evident.   “You can’t argue with success!” Masters said of Brown’s accomplishments.

When Brown took to the podium, he acknowledged many businesses and individuals who helped make the project a success. He recognized Robert Healey, head of Viking Developers, who created the vision for the Master Plan. He acknowledged banks and businesses and businessmen and women who stood firm with him as he pushed the controversial project forward year after year. He also acknowledged Carey O’Donnell, president of the O’Donnell Agency, the public relations firm that has effectively kept the project in the public’s eye at each stage of progression. Brown acknowledged that O’Donnell’s unique ways of marketing the project and her non-traditional celebrations for the city, have been outstanding.

U.S. Senator Bill Nelson and U.S. Congressman Alcee Hastings sent representatives and congratulatory letters, pledging further support of the project.   The project is slated to be opened for the public’s use later this spring.