Sculpture of ‘Forgotten Soldier’ to be unveiled in Key West ceremony 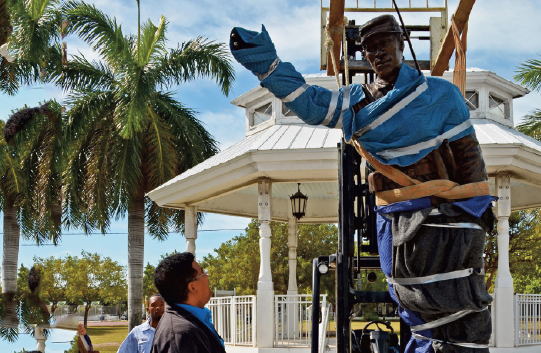 In January of 1863, Col. James Montgomery of Kansas was authorized to raise a regiment of troops consisting entirely of free blacks and former refugee slaves. He came to Key West to recruit for that regiment. All Africans between the ages of 15 and 50 who were not already serving were ordered to undergo medical clearance and report for transport to South Carolina to fight. Some of these men returned to Key West after the war and started families. Many were injured. At least 18 paid the ultimate price.
Artist Ed Knight was commissioned to create a sculpture to honor black men of Key West who served in a union regiment during the Civil War. A ceremony to unveil that work of art is scheduled for Feb. 16 at 11 am at Bayview Park in Key West. The Feb. 16 date is significant because it was the date the men reported for duty.
Although the men’s names have been thought lost to history, their sacrifice lives on. Recently, 126 names have been discovered, and they are familiar names to Conchs and longtime residents.
Key West Commissioner Clayon Lopez is encouraging all to attend the unveiling as a part of Black History Month.

Next post Homeless shelters preparing for influx during cold weather