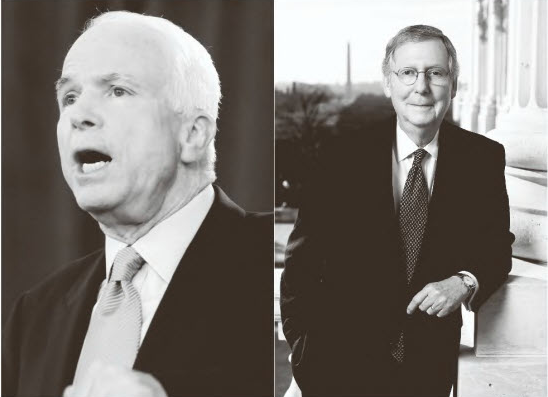 WASHINGTON – Millennials have emerged as the nation’s largest living generation yet that demographic shift isn’t reflected in the upper reaches of the Republican controlled Senate, where the body’s oldest members are the power brokers.

And several are asking voters for new six-year terms. At 82, Chuck Grassley wants Iowans to send him back to the Senate for a seventh time. The Republican chairman of the Judiciary Committee pitches his seniority as a plus, telling voters he gives them a “big voice at the policy making tables” in Washington.

Arizona’s John McCain, the 79-year-old chairman of the Armed Services Committee, also is running for re-election. So are Richard Shelby of Alabama, the Banking, Housing and Urban Affairs Committee chairman who turned 82 on Friday, and 71-year-old Johnny Isakson of Georgia, who leads the Veterans’ Affairs Committee and the Senate’s ethics panel.

Other committees are controlled by senior Republicans whose terms don’t end for at least a few more years. Orrin Hatch of Utah, the chairman of the Finance Committee, is 82 and has been a senator since 1977 – the same year Jimmy Carter was inaugurated as president, Elvis Presley died and the first Stars Wars movie came out.

Oklahoma’s James Inhofe is 81 and heads the Environment and Public Works Committee. Pat Roberts of Kansas, 80, runs the Agriculture Committee and 78-year-old Thad Cochran of Mississippi leads the powerful Appropriations Committee. At 75, Lamar Alexander of Tennessee is chairman of the Health, Education, Labor and Pensions Committee.

Three senior Democrats have opted to retire at the end of the year: Minority Leader Harry Reid of Nevada, who is 76, along with Maryland’s Barbara Mikulski, 79, and California’s Barbara Boxer, 75.

But Vermont Democrat Patrick Leahy, 76, is running for another term. Leahy, first elected in 1974, has been in office longer than any other currently serving senator – 41 years. He’s the top Democrat on the Judiciary Committee.

The average age of all senators actually has decreased from 63 to 61 since 2009 due to younger members from political parties being elected, according to the Congressional Research Service. The youngest are members of Generation X: Sens. Tom Cotton, R-Ark., who turns 39 on May 13, and Cory Gardner, R-Colo., 41.

Millennials, who are Americans born between 1981 and 1997, numbered 75.4 million as of last July and surpassed the shrinking baby boomer population, according to Pew Research Center senior researcher Richard Fry. He projects millennials to peak in 2036 at 81.1 million.

The Senate also remains overwhelmingly white and male. Of the Senate’s 16 full-time “standing” committees, 10 are chaired by white Republican men over the age of 70. One is led by a female Republican: Sen. Lisa Murkowski of Alaska runs the Energy and Natural Resources Committee.

Overall, there are 20 women in the Senate – six are Re- publican.

Age, strictly as a number, can be deceiving. Cochran isn’t the oldest senator, but questions about his mental state have persisted since he was re-elected to a seventh term in 2014.

During Senate hearings, Cochran reads primarily from prepared text and he often cedes his prerogative as chairman to be the first to question witnesses. Cochran asked no questions of Defense Secretary Ash Carter and Gen. Joseph Dunford, the chairman of the Joint Chiefs of Staff, at an April 27 hearing despite deep divisions between Republicans and the Obama administration over defense spending and the strategy for defeating the Islamic State group.

Chris Gallegos, Cochran’s spokesman, said the allegations during the 2014 primary were “not based on facts.” He said the senator is in fine health and keeps a vigorous schedule. “He knows what’s going on,” Gallegos said.

McCain shows no signs of losing his edge. He’s prone to skewering witnesses who appear before the Armed Services Committee, particularly if he finds inconsistencies in their testimony. McCain also regularly fields questions from throngs of reporters as he’s coming and going from votes on the Senate floor.

Isakson announced last June he has Parkinson’s, but said the disease is in its early stages and won’t affect his ability to serve. Parkinson’s is a chronic and progressive movement disorder and it’s caused Isakson to walk with a slower, shuffling gate. Yet Isakson, in his second Senate term, is favored to win a third in heavily Republican Georgia. He won 58 percent of the vote in 2010.

In Iowa, Grassley’s age hasn’t been an issue before. He’s not lost a general election in more than 50 years, usually getting more than 60 percent of the vote. First elected to the Iowa Legislature in 1958, Grassley has served in Congress since 1974 including six years in the House and 36 years in the Senate.

Grassley isn’t the oldest senator. He’s a few months younger than Dianne Feinstein, a California Democrat, who turns 83 on June 22.