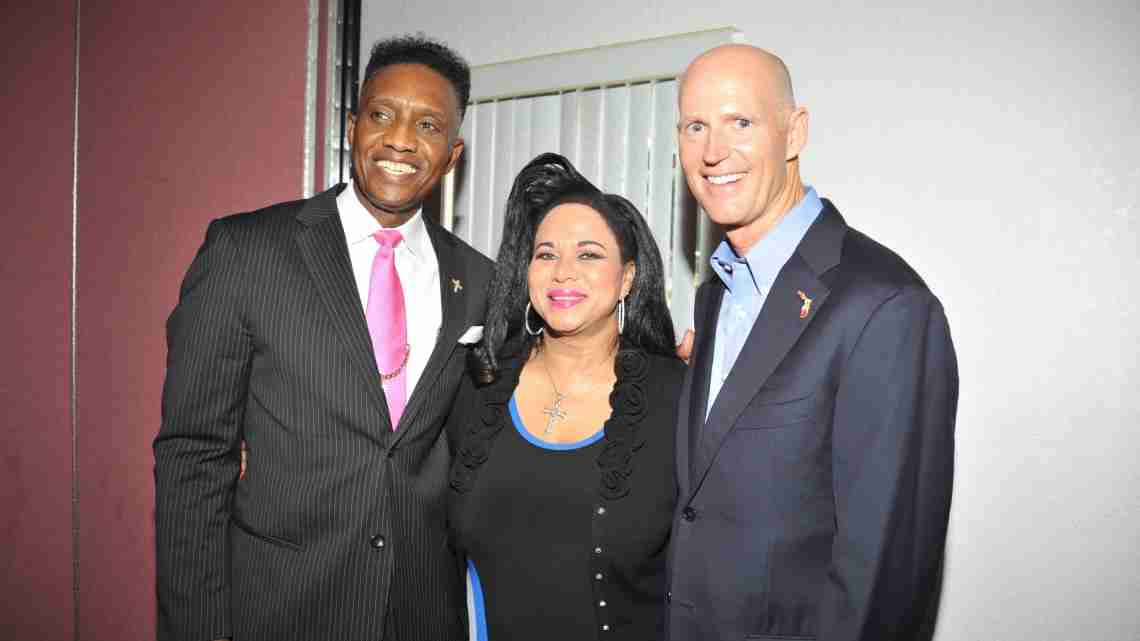 THIRTY-YEAR PARTY ALLEGIANCE: On the left, Reverend O’Neal Dozier, Esq. is joined on the right by his wife Leketia Dozier, Esq., and Governor Ric Scott.

POMPANO BEACH, Fla. – It seems no matter how far President Donald Trump goes in his questionable rhetoric, tweets and antics, it appears to roll right off his sleeves – and up until now, doesn’t appear to have hurt him much.

But there’s one South Florida Republican who’s a lawyer, a pastor and a former NFL football player for the Chicago Bears and New York Jets who says enough is enough! He has had enough of Donald Trump and his own party and he’s ready to bail on the G.O.P. – all because of Trump!

“He’s a horrible person,” said the Reverend O’Neal Dozier, regarding the president. Dozier is Senior Pastor of The Worldwide Christian Center in Pompano Beach, and has been a staunch Republican for over 30 years. He’s even spent considerable time convincing others – particularly other blacks, to join the party. And yes, he voted for Donald Trump!

But all of that loyalty has come to a screeching halt as of late, since Trump has been in office and has demonstrated what he’s all about.

“I have been heavily involved in the Republican party and a defender of the party. I’ve gotten many others to join the party too. I’ve worked closely with George W. Bush, have been an advisor to Jeb Bush and helped appoint judges as a member of the Judicial Nominating Committee. I was also an advisor to Charlie Crist when he was a Republican,” said Dozier regarding his loyalty to the Republican Party over three decades.

But Trump, he says, is trying to redefine the Republican Party, and has now corrupted it. “I voted for Trump, because looking at the two candidates, Hillary Clinton was a terrible candidate. If there had been a decent Democrat running, I would have voted for a better Democrat – even though I’m a Republican.”

Dozier said Trump is the most divisive president ever. “He’s the most divisive one we’ve ever had. He lacks in diplomacy. He’s a defender of racism and white supremacy so that makes him a racist!” said Dozier. “I do not support Donald Trump in any of his ways. The man is horrible!”

Dozier said Trump’s fight with the National Football League (NFL) and the National Basketball Association (NBA) was unheard of.

“As a former NFL player, I was appalled he chose a fight with the NFL and the NBA,” Dozier said, speaking of the controversy that erupted several months ago after the president said pro players who kneel during the National Anthem in protest of police brutality against blacks should be fired. Trump also referred to those players as a derogatory curse word, sparking nationwide controversy and debate over his words against the players and whether they have a right to kneel or stand during the anthem.

“I served in the military for us to have the right to stand or not to stand. It’s our privilege,” said Dozier.

Dozier said the fellow Republicans who refuse to speak out against Trump are afraid of losing their supporters, so they remain silent. But Dozier said regardless of the backlash he may receive for speaking out against Trump, he felt it was time to address the issue.

“I feel compelled to speak out. Something in my heart tells me people want me to speak out,” Dozier said, explaining why he’s leaving behind the party that he has so loyally defended for so long. “I’m switching to Independent. Absolutely I can no longer, with good conscious, remain in the Republican Party. If I remain in the Republican Party, then my credibility is shot. As a Christian, I cannot support him (Trump) or the party. I cannot support anything that is ungodly,” he said.

Next post CVS pushes into insurance with $69 billion Aetna bid