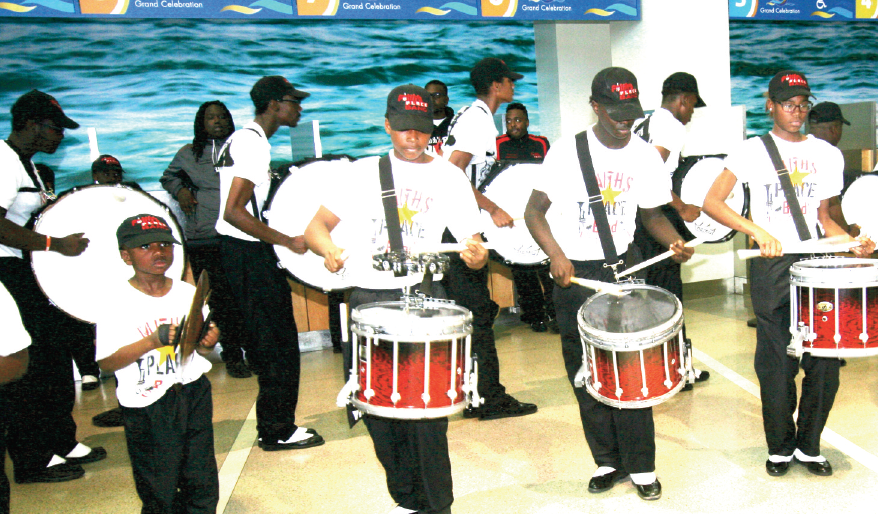 RIVIERA BEACH, Fla. – It started innocently enough. Jean Enright, long-time Port of Palm Beach Commissioner and former congressional candidate, was asked to secure a local high school marching band to rev up the crowd for a Hillary Clinton rally that was scheduled at the Port on February 15.

Enright thought, after all, it’s not every day that a former president or his wife come to Riviera Beach — even if it is to stump for Hillary as she seeks the bid for the White House.

So with her marching orders in tow (no pun intended), Enright contacted the world renowned Suncoast High School – which is known for its top academics and is located in the heart of Riviera Beach – to ask if the band would perform for the arrival of the city’s big guest.   As it turned out, Hillary Clinton cancelled, but sent her husband, former President Bill Clinton instead.

But somehow, after giving a rousing and upbeat performance before the former president took to the stage that day, things have now taken a turn for the worst for the Charger sonic band and its leaders. Three school officials are now in hot water for allowing the band to perform there; because, according to Palm Beach County Schools Superintendent, Robert Avossa the school violated school district policy for performing at a political event. The band and cheerleaders were captured on camera by numerous TV stations, in newspapers, and on social media with their spot-on performance. But when Superintendent Avossa saw it on Twitter, he said he knew immediately that it was a violation of school policy. No school in the district is allowed to perform for a political event – under any circumstance, according to Avossa.

Enright apparently had no idea of this and told WPEC-TV that she simply thought it was a great opportunity for the kids to perform before a former president. “I think the children were very excited when they heard a president was at the port, in the same town where they went to the school, the excitement was so great all the students wanted to see a former president,” Enright explained. She said the vice chair of the Palm Beach County Democratic Party asked for her help in finding a band, and she did so.

Now, Suncoast High principal, Linda Cartlidge, Band Director, Ernest Brown, and a cheerleading coach (unnamed) are all now being investigated for their roles in signing off on the performance.

Avossa said both Brown and Cartlidge knew the Clinton event was a political event, yet it’s unclear if they knew it was a violation of school policy. Avossa said he’s disappointed, expressing some surprise that it happened under a veteran principal’s watch. Cartlidge, who is about to retire at the end of the school year, has been with the district since the mid 1980’s.. “Quite frankly, I’m disappointed. It’s clearly against district policy to be engaged in any political activity,” he said. “We cannot under any circumstance participate either formally or informally in political events.” He said neither Cartlidge nor Brown seemed to have any political motivation for the engagement. He said the principal’s motivation seemed to be simply to allow the kids to participate in civics activities.

Cartlidge signed off on the performance, but it was Band Director Ernest Brown who submitted the paperwork to Cartlidge, who then, approved of the field trip.

Some observers have questioned if there would have been the same scrutiny if the band had performed for a Republican candidate.

Media inquiries have been referred to the school district’s media relations department. So far, no one involved has been suspended or removed from the school during the investigation. Depending on the outcome, disciplinary actions could include a written or verbal reprimand, or if there was a pattern of behavior someone could be terminated.

The Suncoast band has previously performed abroad in both Paris and London under Brown’s leadership.