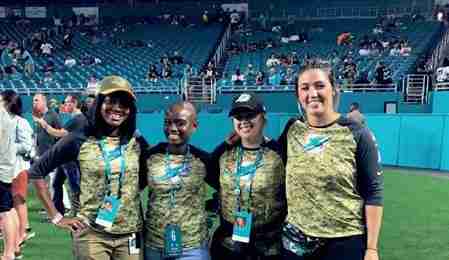 MIAMI – In her young life, Tiffany Davis, 31, of Pembroke Pines has had a rough go of it. But to talk to her, you’d never know. Her vivacious, lively and upbeat demeanor defies the fact that she has faced cancer head on –not once, but twice. First, it was breast cancer at the age of 28, and then last year, she was diagnosed with leukemia.

Davis has found a way, through her positive outlook to move forward in life even as she goes through a clinical trial hoping to put the illness in remission and paving the way for a bone marrow transplant.

The (Miami ) Dolphins Cancer Challenge (DCC) happens on Saturday, February 10, but Davis won’t be able to ride in the bicycle challenge as she has done for the past two years. She will, however, be right there volunteering her time to make sure everyone else gets the most from the challenge.

Davis’ mother will ride in her place; hoping to complete at least 25 miles.

DCC VIII weekend will commence with the Kickoff Party on Friday, Feb. 9, followed by the DCC signature event on Saturday Feb. 10 that will include five bike routes through South Florida, a run/walk 5K and a finish line celebration concert by the Goo Goo Dolls with Big Head Todd and The Monsters.

The DCC VIII will spotlight survivors – their resiliency and path to overcome the obstacles cancer presents in their journey. The Survivor Program presented by the Harcourt M. and Virginia W. Sylvester Foundation will share the stories of #CancerFighters, those on the front line who galvanize efforts at the DCC. The DCC’s mission is to improve people’s lives through financial support for innovative cancer research at South Florida’s only academic-based cancer center – Sylvester Comprehensive Cancer Center at the University of Miami.

Since its inception, the DCC has raised more than $22.5 million, donating 100 percent of participant-raised funds to Sylvester. initiative.

Davis is among those survivors who learned about the DCC through Sylvester, where she is currently undergoing treatment. She was a healthy 28 when she noticed she had a lymph node swollen under her arm. Despite her young age, a gynecologist ordered a mammogram. The doctor then advised her to go back to her gynecologist to get a referral for an ultrasound. The results came back that day and she was referred to breast surgeon who did a biopsy. She was at work when she received the voicemail that would change her life. The biopsy results were in and the doctor wanted to see her the next day and asked her to bring a family member with her. She knew then in her gut it was something serious because of her family history of breast cancer.

A second opinion confirmed the diagnosis. She went through eight rounds of chemo and by the last round on July 10, 2015, the ultrasounds revealed the cancerous tumor had shrunk in size. She had surgery a few weeks later, removing the tumor from her breast. Following 36 rounds of radiation, a double mastectomy and visiting Sylvester nearly every day, in November of 2015 she was officially in remission. Her last reconstruction surgery was June 2016.

It was at this time that a close friend and Dolphins employee shared about the DCC. Together they formed Team Tiff Strong and in February 2016, just months removed from cancer treatments, she participated in DCC, riding 13 miles. Feeling stronger than ever, in February 2017 she rode 25 miles.

Eventually, she graduated from seeing the oncologist every three months to every six months. But during her last six-month visit in July 2017, the lab results came back abnormal. At age 31, Tiffany was told she had cancer again. Leukemia had developed in her cells.

She is currently on cycle three of the trial, and the doctors say it takes at least six cycles to see how the body is responding.

Davis said even though she doesn’t know what the future holds, she remains positive and upbeat. “You have to keep hope and faith over fear and remain positive and keep pushing.”

Next post Is Sugar the Cause of Your Weight Gain? Tips to Cut Back