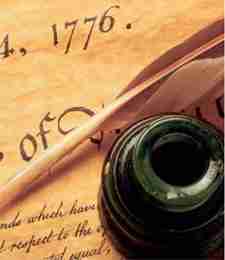 Simply stated, the answer is “No!” And the following explains why.

The Declaration of Independence asserts, “We hold these truths to be self-evident, that all men are created equal, that they are endowed by their Creator with certain unalienable Rights, that among these are Life, Liberty, and the pursuit of Happiness.” Despite that, slavery was legal in the 13 colonies, which means 20 percent of the population was held in brutal bondage without liberty or happiness or a real life.

Of the 56 white male property owners who signed that Declaration, 27 were slave-holders, slave-shippers, and/or slave-investors.

Thomas Jefferson- who was the primary drafter of the Declaration of Independence- enslaved 175 black women, men, and children in 1776 and 267 by 1822.

Also, he was a racist pedophile who began raping Sally Hemings when she was 14-years-old. And he impregnated her seven times.

In addition to that, as Governor of Virin the American ginia in 1779, he signed a bill to encourage enlistment Revolutionary War by compensating white men by giving them a “healthy sound Negro.”

In his 1785 book entitled Notes on the State of Virginia, he wrote about “the preference of the ‘oran-outan’ (meaning an ape-like creature) for … Black women over those of … (its) own species.” He added that blacks “are inferior to the whites …” and have “a very strong and disagreeable odor.”

There was language in an early version of the Declaration of Independence that condemned the King of England for kidnapping Africans and shipping them from the Motherland to Europe. That language properly described slavery as “execrable commerce.” However, the men who participated in the drafting of that document realized that people who live in glass houses shouldn’t throw stones. So that language was deleted.

America’s history books still fail to mention that Crispus Attucks- the first to die in the so-called Boston Massacre on March 5, 1770, an event that began the violence that would lead to the Revolutionary War- happened to be in that city on that date because he was with a group of laborers on the waterfront. And that was because he was a professional seaman who had been on various ships for 20 years after having courageously escaped slavery. His courage stemmed from what he had learned from his African father and Natick “Indian” for blacks mother. But none of that is taught in this country’s schools.

Neither is the fact that 5,000 brave black men were instrumental in leading America to victory over Britain by 1783.

Why aren’t their names and biographies widely publicized?

Maybe it’s because General George Washington initially barred free and enslaved blacks from serving. But he changed his mind when the British began winning the war.

Maybe it’s also because, after blacks helped win the war for America, many of them were thrown back into American slavery.

By the way, July 4th isn’t really Independence Day. July 2nd is. The Second Continental Congress met in Philly on July 1st and then on July 2nd approved a resolution declaring independence. The only thing that happened on July 4th was the approval of an edited version of the Declaration.

In regard to that July 2nd date, John Adams- a drafter, delegate, and Founding Father- wrote to his wife Abigail on that same day, “I am apt to believe that July 2nd, 1776 will be celebrated by succeeding generations as the great anniversary festival.”

In 1777, Congress, for the first time ever, considered memorializing that historically pivotal July 2nd date. But there was a problem: Congress considered it two days late, which is why July 4th became the officially recognized date.

Incidentally, most of the delegates didn’t sign the Declaration until August 2nd when John Hancock prominently “graffitied” his name on it. And it wasn’t until November 19 that the final delegate signed it.

Apart from that, there’s a strong argument that even the year 1776 is incorrect since the Revolutionary War officially began on April 19, 1775.

Parenthetically, I should mention that some of the signers weren’t even American. Eight were foreigners from Britain, i.e., the country of the enemy. I wonder if today’s anti-immigrant right-wingers in the U.S. know that. On second thought, I don’t wonder.

And seamstress Betsy Ross didn’t sew the flag in 1776 (or any other time) after supposedly having met General George Washington. She had absolutely nothing to do with it. Her grandson William Canby completely made up the story nearly a hundred years later in 1870 when he presented false affidavits from family members to the Pennsylvania Historical Society in Philadelphia.

Next post Florida Memorial University has another interim president