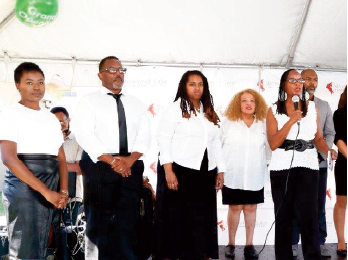 The South Florida Women of Color can add another accomplishment to its growing list. On Saturday, Jan. 16, the organization hosted the grand opening of its WOC Empowerment Center, located at 2219 Sistrunk Blvd., Fort Lauderdale.

Building on its mission to give back, the empowerment institute will allow the group to house its administrative programs, conduct meetings and group gatherings that support some of its goals.

Burnadette Norris-Weeks, WOCEC chairperson, said during the program, “it’s appropriate that our first event held at the facility is focused on voter preparation. In 2012, the largest voting bloc in the U.S. were black women who casted ballots at a rate higher than any other gender, racial, or ethnic group. It is critical that women of color continue this trend and stand as leaders for some of the social and economic changes needed in our community right now.”

State Representative Gwen Clarke Reed, along with other community leaders from various organizations and business groups were present.

In addition to Norris-Weeks, Esq., Kathy Eggleston and Michelle Austin, Esq. are founding directors of Women of Color Empowerment Institute, Inc, which focuses on building relationship and uniting leaders of color to do great things. In addition to a yearly conference and quarterly “Advocates for Change” forums, which are open to the public, the institute holds a host of special events focused on leadership for its members. The institute also has a highly competitive professional mentorship program for professionals under the age of 40 and a magazine WOMEN LEAD.

For more information regarding its programs, call (954) 768-9770 or visit Southfloridawomenofcolor.com.