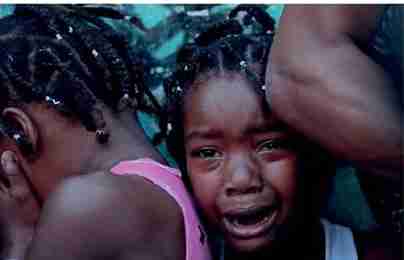 Children cry during a shootout between police and drug traffickers in the Alemao complex of slums, in Rio de Janeiro, Brazil.

RIO DE JANEIRO — It’s often said the birth of a child changes your life. Covering the shooting deaths of children in recent months amid a wave of violence in Rio de Janeiro, I have realized from the pain of grieving parents that losing one probably changes you even more.

I began working as a photographer in Rio de Janeiro in 2004, and since then I have covered numerous deadly shootings including many innocent people caught in the crossfire.

Sometimes it happens when heavily armed drug traffickers battle over turf. Other times gangs shoot it out with elite units of military police — more like commando squads than what usually comes to mind when people think of police.

For all its natural beauty, the “Marvelous City,” as Rio is called, has long struggled with violence. It seems to possess a toxic mix of deep social and racial inequalities, lots of guns, drugs and gangs, slums built helterskelter on hillsides that are essentially impossible to patrol and brutal tactics by police, who themselves are often targeted and killed.

Around 2008, I began noticing a drop in the shootings thanks to the implementation of Police Pacification Units, known by the Portuguese acronym UPP.

Thousands of officers were stationed in many of the worst favelas, or slums, while the city coupled that enforcement with increased public services.

Brazil was booming economically, and the city had two global showcase events on the horizon that were incentives to make the program work: the 2014 World Cup in Brazil and the 2016 Rio Summer Olympics.

But the pacification program was clearly showing cracks before the Olympics as Brazil’s worst economic crisis in decades set in, combined with a bevy of multi-billion dollar corruption scandals that have left state coffers barren.

Now, more than a year after the Games, it feels like a return to the savagery of the early 2000s.

For me the proof is in the heart-wrenching stories of kids killed in the crossfire. Authorities don’t specifically track how many of them die in shootings — they are lumped in with all homicides — so it’s impossible to say for sure whether violence is worse today than in years past.

But in my 13 years in Rio, I don’t remember a time when there has been such a string of shocking and senseless cases of children dying.

They have been gunned down in restaurants, at their friends’ homes, at school, all manner of places where you’d think they would be safe.

In a sense, it doesn’t matter whether it was a gang member or a cop who pulled the trigger. Young people like Sofia Lara, Fernanda, Maria Eduarda, Felipe, Arthur and Vanessa are gone, and their families are left to deal with emotions ranging from emptiness and rage.

I’ve seen parents nearly pass out at funerals, clinging to pictures of fallen children and breaking down at just the mention of their names.

No matter how many times I cover these tragedies, I’ll never get used to it — and I never want to.

These parents should not have to be dying inside, because their kids should not be dying.

Next post Key West first responders can get free cruise

Previous post Dealing with grief from an unexpected, accidental death