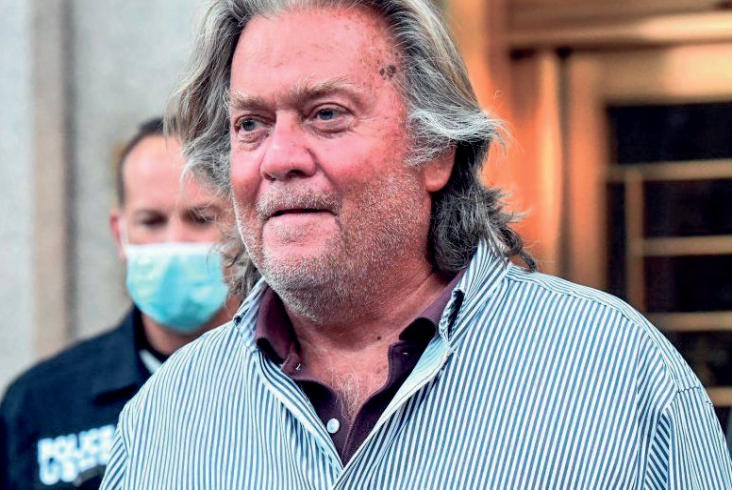 WASHINGTON (AP) – Steve Bannon’s indictment on contempt of Congress charges is the nation’s ﬁrst since 1983, and his appearance in federal court Monday provides a rare glimpse into one of U.S. lawmakers’ politically messiest and least-used powers.

The last successful prosecution reaches all the way back to Watergate and its aftermath when G. Gordon Liddy and Richard Kleindienst were convicted and pleaded guilty, respectively, for refusing to answer congressional questions.

Bannon is facing federal charges for refusing a House subpoena to tell Congress what he knows about the lead-up to the Jan. 6 Capitol attack to interrupt certiﬁcation of Democrat Joe Biden’s election victory over President Donald Trump.

The last indictment three decades ago was less historic: A federal environmental ofﬁcial under President Ronald Reagan failed to heed a House subpoena. The ofﬁcial, Rita M. Lavelle, who headed the Superfund, would go on to be acquitted of the contempt charge but later was convicted of lying to Congress. She was sentenced to six months in prison and ﬁned $10,000.

Defendant Lavelle was a member of the Republican administration, while Democrats controlled the House. And the Justice Department has been wary of prosecuting such cases when the White House and the House of Representatives are controlled by opposing political parties.

“While the (contempt) law doesn’t differentiate in any way between a Republican or a Democratic president or Congress, it tends to break down along those lines,” said Stan Brand, who served as former House counsel when lawmakers referred the thenEPA chief to the U.S. Justice Department for criminal charges.

Prior to that case, the majority of contempt of Congress cases were in connection to the House Un-American Activities Committee, but a number of those were eventually overturned due to procedural failures.

At present, Democrats control the House and White House as lawmakers are probing the worst attack on the U.S. Capitol in two centuries, which occurred with Republican Trump at the White House calling for protests. But even with the current unique circumstances at play, prosecution of these charges rely on a law that hasn’t produced a conviction in decades and could take years to litigate.

“Historically, if you look at the record of these types of cases in the `50s, ’60s, even the late `’40s, so many of them were thrown out by the courts for technical deﬁciencies,” Brand said.

“It’s not that these cases are complicated, but they are difﬁcult cases to make,” he added.

When Brand was House counsel in 1982, a subcommittee held then-EPA chief Anne Gorsuch Burford, the mother of current Supreme Court Justice Neil Gorsuch, in contempt for her refusal, at the direction of then-President Reagan, to turn over subpoenaed documents about her agency’s efforts to enforce a law requiring the cleanup of hazardous waste dumps. The Justice Department declined to pursue the charges and went on to ﬁle a lawsuit to prevent further action on the contempt referral.

Brand said the hurdles that have faced past committees is that the Justice Department has historically not prosecuted executive ofﬁcials who were instructed by the president to raise executive privilege.

Bannon, 67, was indicted on Friday on two counts of criminal contempt -one for refusing to appear for a congressional deposition and the other for refusing to provide documents in response to the committee’s subpoena.