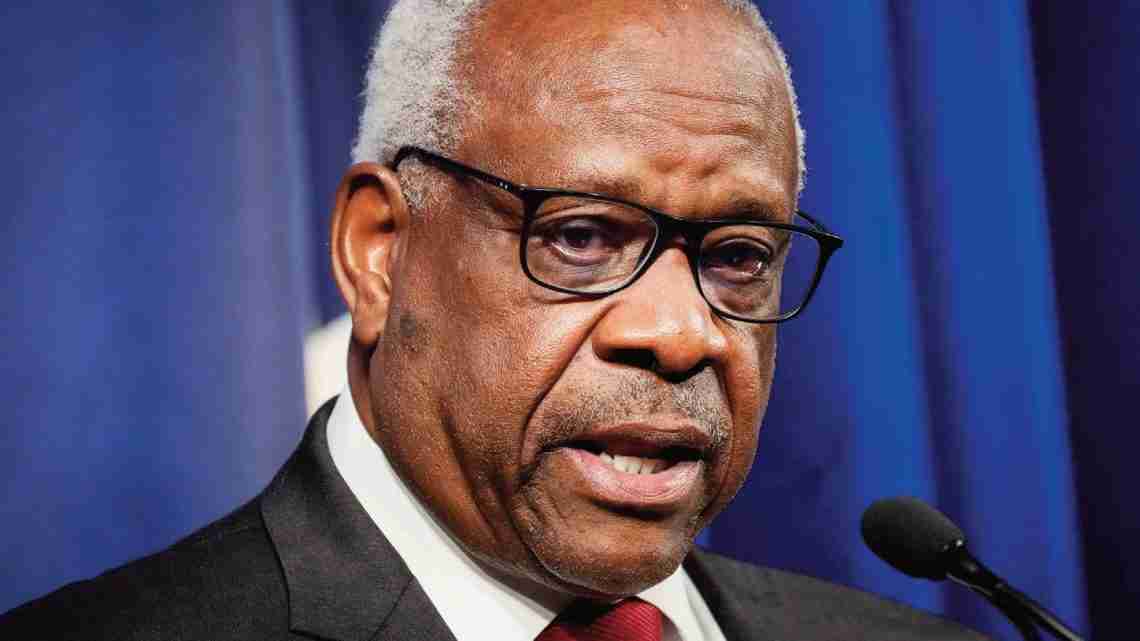 If he was ready to take a victory lap, Thomas didn’t let on. Instead, he called on his colleagues to do more, to revisit the Supreme Court’s cases acknowledging rights to same-sex marriage, gay sex and contraception.

After 30 years on the court, Thomas’ influence has never been greater, and yet he remains a lightning rod for controversy.

That includes recent questions about his wife’s role in attempting to overturn the results of the 2020 election and his decision not to recuse himself from cases that involved it.

Thomas has said nothing in response to the criticism, and he could still serve another decade or more, racking up additional victories with a court that has become more conservative.

“If you serve long enough sometimes things go your way eventually,” said Ohio Northern University professor Scott Gerber, the author of a book on Thomas. Gerber said that at this point there are people who have moved through the conservative legal movement, studying conservatives like Thomas and the late Justice Antonin Scalia, who have now joined Thomas on the court.

“They’ve learned from him and agree,” he said.

Thomas is now the senior member of a group of conservative justices with the votes to control the court, not only what cases the court takes on but how broadly it rules. That’s a change for Thomas, whose views were for years seen as far out of the mainstream.

”He’s always been known as not taking quite the same approach,” said George Mason University law professor Jennifer Mascott, who worked for Thomas as a law clerk. But in the guns case, she said: “Everybody joined with him, his approach.”

Ralph Rossum, who has also written a book about Thomas, said the justice once compared himself to a marathon runner who has to take the long view. Now, as time has gone on and more conservative justices have joined the court, Thomas is, in a sense, running “faster and faster” and “lengthening his stride,” Rossum said.

Thomas declined an interview request from The Associated Press.

On top of the criticism Thomas has faced over the years for his views, he and his wife, conservative activist Virginia Thomas, have faced criticism recently for their actions following former President Donald Trump’s defeat in the 2020 election.

Among other things, Virginia Thomas exchanged messages with then-White House chief of staff Mark Meadows encouraging him to work to overturn President Joe Biden’s victory and urged Republican lawmakers in Arizona, where Biden won, to choose their own slate of electors. The House committee investigating the Jan. 6, 2021, insurrection at the Capitol has asked her for an interview.

As for the justice, there has been criticism that because of his wife’s actions he should have recused himself from a case involving the committee’s access to presidential documents and lawsuits challenging the election results, challenges the court turned away. Democrats in Congress wrote in a letter that his participation is “exceedingly difﬁcult to reconcile with federal ethics requirements.”

In recent days, following the abortion decision, thousands signed a petition saying he should no longer be allowed to teach a class at George Washington University’s law school. The university rejected that idea.

More personally, after a draft of the abortion decision leaked, there were protests at his house and the homes of other conservative justices. In an appearance after the leak Thomas drew a contrast between liberals and conservatives in unusual us-versus-them terms. “You would never visit Supreme Court justices’ houses when things didn’t go our way. We didn’t throw temper tantrums,” Thomas said.

What many Americans know about Thomas stems largely from his bruising 1991 conﬁrmation hearing, when he was accused of sexual harassment charges by former employee Anita Hill – charges he denied.

He wrote a bestselling book in 2007 but for years – partly because he chose not to ask questions during arguments at the court and partly because he is a self-described introvert – Thomas spoke largely through his opinions.

Not infrequently, because his views were so conservative compared with the rest of the court, he wrote opinions that spoke only for himself.

That has changed. The court has grown more conservative over the last several years during Trump’s administration, particularly after the death of the liberal Justice Ruth Bader Ginsburg and her replacement in 2020 by conservative Justice Amy Coney Barrett. Conservatives now have a six-justice majority and can lose the vote of Chief Justice John Roberts, who is sometimes less willing to issue sweeping rulings, and still have a majority.

Thomas has also become more vocal in general over the past two years. When the court began hearing arguments by telephone because of the pandemic and changed the arguments’ format so justices asked questions one by one, Thomas joined in. He continued asking questions when the justices returned to their courtroom last fall, his colleagues deferring to him for the ﬁrst questions.

Thomas’ influence has been felt in other ways, too. Many of the men and women Thomas mentored as law clerks held political appointments in the Trump administration. That includes John Eastman, the conservative lawyer who aided Trump’s efforts to undo the 2020 election results. Ten other former law clerks are now federal judges who hold lifetime appointments. Their ranks include Kathryn Kimball Mizelle, the federal judge in Florida who in April struck down the national mask mandate on airplanes and mass transit.

Thomas is 74. Justice Stephen Breyer is retiring this year, just before his 84th birthday. Ginsburg served until her death at 87. In 2028, Thomas would surpass Justice William O. Douglas as the longest-serving justice ever.

Gerber, the Ohio professor, said Thomas has always said that becoming a justice is a lifetime job.

Said Gerber: “It’s like Queen Elizabeth. She’s been in power 70 years and she’s going to stay until she’s carried out in a box. That’s his view also.”

Next post American Truth & Reconciliation is a must, now