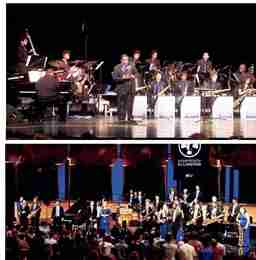 TRIPLE CROWN: For the third time, the Dillard Center for the Arts Jazz Ensemble has won first place at the Essentially Ellington High School Jazz Band Competition in New York.

New York, NY – They have done it again. For the third time, the Dillard Center for the Arts Jazz Ensemble has taken home first prize at the prestigious 23rd Annual Essentially Ellington High School Jazz Band Competition and Festival at Frederick P. Rose Hall, home of Jazz at Lincoln Center. Under the leadership and direction of Christopher Dorsey, Dillard earned First Place at Essentially Ellington National Jazz Championships in 2011 and 2012. The talented band also won First Place at Swing Central National Jazz Competition in 2010, 2011 and 2012.

Dillard was among the top high school jazz bands in the country that participated in the Essentially Ellington High School Jazz Band Competition and Festival. Beginning on May 10, the bands were immersed in three days of mentoring, jam sessions, and workshops. The competition culminated in the May 12 concert where each top-placing band performed with their choice Jazz at Lincoln Center Orchestra member as a soloist.

The final concert also featured the world-renowned Jazz at Lincoln Center Orchestra with Wynton Marsalis – whose members served as mentors for the finalist bands throughout the week – performing repertoire made famous by Duke Ellington.

At the ceremony, Wynton Marsalis presented awards to each of the top 15 high school jazz bands. In addition to its firstplace trophy, Dillard was also awarded $5,000. Newark Academy received an award of $2,500. Tucson Jazz Institute accepted the third-place award of $1,000. Roosevelt High School and Beloit Memorial High School received honorable mention with an award of $750. The remaining ten bands were each awarded $500. All monetary awards are to be used for improving the jazz education programs of each respective high school.

Next post Youth can boost self-esteem, learn mindfulness at conference