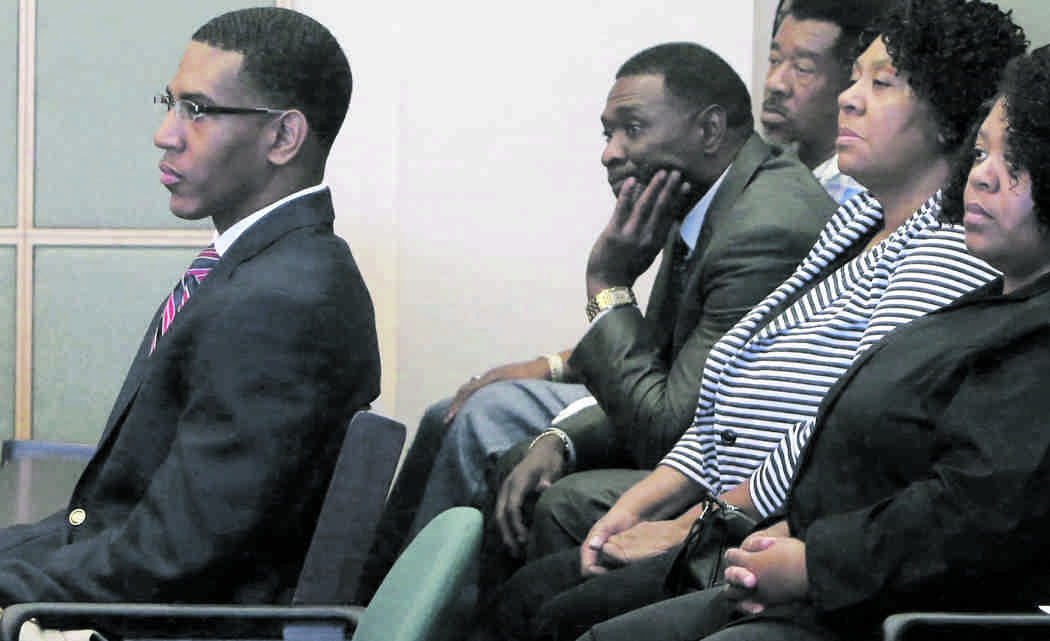 ORLANDO, FL — A former Florida A&M band member accused of being the ringleader of a brutal hazing ritual known as “Crossing Bus C” that killed a drum major was convicted Friday of manslaughter and felony hazing.

Dante Martin, 27, was the first to stand trial in the November 2011 death of 26-year-old Robert Champion aboard a band bus parked outside a football game where the well-regarded Marching 100 band had performed. The case brought into focus the culture of hazing in the band, which was suspended for more than a year while officials tried to clean up the program.

Martin was known as “the president of Bus C,” witnesses testified, and he organized the initiations that required fellow band members to try to make their way through a pounding gauntlet of fists, drumsticks and mallets from the front of the bus to the back, including on that November day. Two other band members went through the bus before Champion, who was from Decatur, Georgia. Martin was convicted of misdemeanor hazing counts in their beatings.

Champion’s parents sat silently as the verdicts were read. Martin sat with his head down as several members of his family wept in the gallery behind him.

“No one won here today – no one,” said Robert Champion Sr. “We hate to see anyone’s child go to prison. To know that my son’s life will not be in vain, that he will make a difference, I hope that people will get the message that hazing isn’t cool. It doesn’t work. It doesn’t need to be here. You need to stop now.”

The jury deliberated for about an hour before delivering its verdict.

Martin’s sentencing was set for Jan. 9 and he was taken into custody immediately after the verdict. Manslaughter is punishable by up to 15 years in prison in Florida. The hazing conviction means he could spend up to 22 years in jail.

In the aftermath of Champion’s death, the storied Marching 100, which had played at Super Bowls and before U.S. presidents, was suspended for more than a year, only starting to perform again at the beginning of the 2013 football season. Also, the university’s former president, James Ammons, resigned and the band’s director, Julian White, was fired before being allowed to retire.

Several other former band members have pleaded guilty to lesser charges, and three await trial. Former band member Jessie Baskin pleaded no contest to manslaughter in March and received a year in county jail. He is the only one of the previous defendants to receive jail time.

After the ritual, Champion complained of trouble breathing and vomited, then collapsed and died in a parking lot.

Like Champion’s father, state attorney Jeff Ashton said he hopes Martin’s conviction will serve to deter other from engaging in hazing. The university now requires all students to sign pledges not to haze others.

“That’s why they (Florida lawmakers) passed the hazing statute in 2002, it was to say this process has got to stop,” Ashton said.”It hasn’t worked … I hope the message that gets across to anyone out there who is thinking of participating in these very dangerous activities is that if you do it, and something goes wrong, you’re going to be responsible for it.”

Defense attorneys told jurors the ritual was more akin to a competition and that there was no actual hazing. They said Champion and the others voluntarily took part. “You can’t take it in isolation and act like it was just any other band,” defense attorney Richard Escobar said during closing arguments. “Brutal as it was, foolish as it was … it was competitive.”

Escobar and his co-counsel Dino Michaels left the court room without commenting. But they told Judge Renee Roche they planned to file a motion for a mistrial before the January sentencing.

Ashton argued to jurors that the testimony made it clear that band members were looking for a measure of respect and acceptance by “crossing Bus C.” But he challenged the defense’s argument.

“Tradition didn’t kill Robert Champion,” Ashton said. “Tradition isn’t to blame. Tradition is not an excuse…It’s not a defense to those that got caught.”

Next post The importance of your pets’ timely vaccinations