Food, showers, tents: Does the help, help the homeless? 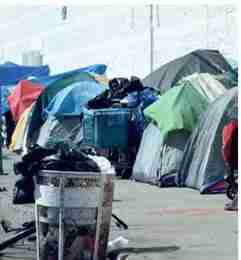 By AMY TAXIN and GEOFF MULVIHILL

ANAHEIM, Calif. (AP) – Mohammed Aly does not see any reason why he shouldn’t try to ease the lives of Orange County’s homeless. But the authorities – and many of his neighbors – disagree.

Aly, a 28-year-old lawyer and activist, has been arrested three times as he campaigned on behalf of street people. Recently, he was denied permission to install portable toilets on a dried-up riverbed, site of an encampment of roughly 400 homeless.

“Put yourself in their position: Would you want a toilet, or would you not want a toilet?” he asked. “It is a question of basic empathy.”

But his detractors – engaged in a dispute that rages up and down America’s West Coast, as the region struggles to cope with a rising tide of homelessness – say Aly and other dogooders are doing more harm than good. However well-meaning, critics say, those who provide the homeless with tents and tarps, showers and toilets, hot meals and pet food, are enabling them to remain unsheltered.

And not coincidentally, they note, nuisances of homelessness like trash and unsanitary conditions fester and aberrant behavior continues.

In California, the San Diego County community of El Cajon passed a measure that curtails feeding the homeless, citing health concerns. In Los Angeles, city officials have closed and reopened restrooms for those on Skid Row amid similar controversies.

The issue is hotly debated across Orange County, a cluster of suburbs and small cities known more for surf culture and Disneyland than its legions of poor.

In the tony seaside enclave of Dana Point, neighbors fear a nightly meal is drawing homeless to a popular state beach where teens play beach volleyball and families picnic and surf.

On the dusty riverbed 30 miles north, a van furnished with shower stalls parks alongside the homeless encampment; those living in the string of tattered tents add their names to a list of dozens waiting to bathe. While the mobile unit aims to help those living on the trash-strewn strip, neighbors worry the 2 mile-long encampment is becoming more entrenched in an area where they once jogged and biked.

“If the ultimate goal is to get them under a roof, why on Earth are you giving all the advantages you would have under a roof on the riverbed?” asked Shaun Dove, a 46-year-old soon-to-be retired policeman from Anaheim, who lives less than a mile from the riverbed in a palm-tree lined neighborhood of threebedroom homes.

“There’s no doubt that giving them stuff there prevents them from a desire to move.” *** The number of homeless living in Orange County has climbed 8 percent over the last two years. In the United States, homelessness rose slightly in the last year to nearly 554,000, pushed up largely by increases on the West Coast, federal data shows. The increase is driven by soaring housing costs, though a drug addiction crisis and need for mental health services are also factors.

Advocates say the homeless population has become more visible as police have cracked down on rules barring camping, driving people from parks and bus benches to a few centralized locations, such as the flood control channel along the Santa Ana River in Anaheim.

Everybody knows that the only solution is more housing; there aren’t enough beds available in a county where the median home price hovers near $700,000. Until there are, many well-meaning residents want to try to alleviate what they feel is a humanitarian crisis by bringing food and other assistance to the homeless.

In a small community like Dana Point, there is no shelter. The nightly meals began more than two decades ago at local churches but were moved to Doheny State Beach after a late night stabbing between two homeless residents.

The picturesque city on bluffs overlooking the Pacific Ocean is known for its million dollar homes and scenic harbor. But homeless have long been drawn to Dana Point and other beach communities which offer public access and wide open spaces – and the beauty and sunshine that lure so many people to California’s shores.

In the late afternoon, volunteers arrive at the beach parking lot with folding tables and trays of chicken or beef or fish and fruit. They often also hand out a sack lunch for the next day to several dozen homeless, day laborers and poor who line up to eat after bowing their heads in a brief prayer.

The homeless say as much as they appreciate it, the food isn’t keeping them on the streets.

Gholamreza Haghighi, 59, said he has been sleeping in the nearby brush for more than two decades – well before meals were served there – and has nowhere else to go.

Jose Luis Gonzalez, 60, said he has been living in his motor home since splitting with his wife and sometimes stops by the suppers to see friends and have a meal. Another homeless man who refused to give his name said he heads there simply to eat.

Volunteers say the homeless are drawn to the beaches because of the open space and access to water and restrooms – not the meals. They feel that feeding people can build trust and lead the homeless to additional services, including housing.