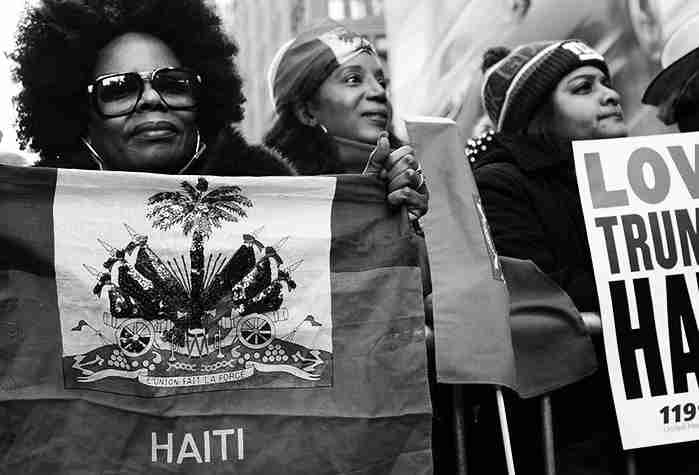 MIAMI (AP) – Haitian immigrants are suing President Donald Trump and Homeland Security officials, alleging racism influenced a decision to end a program allowing them to live and work legally in the U.S. after disasters in their home country.

The lawsuit filed Thursday in New York federal court is one of a handful nationwide challenging the Trump administration’s decision to end temporary protected status for people from El Salvador, Haiti, Nicaragua and Sudan.

The latest case details how the Haitian-American community could be harmed if roughly 60,000 Haitians become subject to deportation.

The dozen plaintiffs include Haiti Liberte, a New York-based weekly Haitian newspaper, where a leading journalist with the protected status may be forced to return home, the lawsuit said.

In Miami, the advocacy group Family Action Network Movement Inc. has had to divert resources from core services such as adult education and health care access to assist more Haitians fearing deportation. It also faces losing several activists who also are plaintiffs, the lawsuit said.

Six plaintiffs face separation from their U.S.-born children, while another plaintiff with cerebral palsy would lose medical care if separated from his brother who is a U.S. citizen, the lawsuit said.

The advocacy group’s executive director, Marleine Bastien, said at a news conference in Miami that Haitians with the protected status make more contributions to the U.S. economy than they take.

“The plaintiffs who are based in Florida are not here because they are working. They have to pay taxes. They can’t rely on charity,” she said.

The lawsuit claims U.S. Homeland Security officials failed to follow protocol when considering whether to renew protections granted to Haitian immigrants after a devastating earthquake struck their Caribbean country in 2010. Those protections were repeatedly extended until the Trump administration announced in November that Haitian recipients have until July 2019 to return home.

Instead of reviewing conditions in Haiti, including a cholera outbreak and destruction from Hurricane Matthew in 2016, Homeland Security officials sought to maintain stereotypes about blacks and immigrants committing crimes and receiving public assistance, the lawsuit said.

The lawsuit cites Trump’s negative comments on immigration from his presidential campaign and separate reports that Trump said thousands of Haitians who came to the U.S. in 2017 “all have AIDS,” and that he used vulgar language to question why the country needed more immigrants from Haiti or from African countries instead of from countries like Norway. Trump has denied the comments.

The order to end temporary protected status for Haitians violates their due process rights “because the termination was based on the President’s categorical and defamatory assertions about all Haitians, which the Haitian TPS recipients were given no opportunity to challenge,” the lawsuit said.

The NAACP and immigrant advocacy groups in California and Boston made similar allegations in previously filed lawsuits seeking reinstatement of temporary protected status for hundreds of thousands of immigrants.

Homeland Security spokeswoman Katie Waldman said in an email Thursday that the agency does not comment on pending litigation.