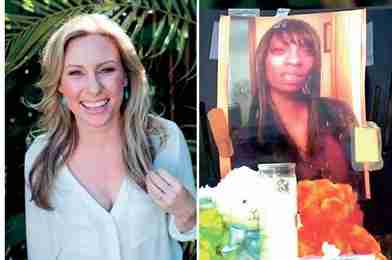 Justine Damond-Left, was fatally shot by police in Minneapolis on July 15. Charleena Lyles, was killed by police in Seattle in June, 2017 after calling police to her apartment.

WASHINGTON – The fatal shooting of an unarmed Australian woman in Minnesota isn’t by any means the first-time police in the U.S. have mistakenly killed someone who called them for help or to report a crime.

Officers around the nation have mistakenly slain or wounded people in other cases, including a pregnant Seattle mother shot to death earlier this year after reporting a break-in and a Georgia man who in 2014 reported that his girlfriend had been stabbed and was fatally shot by the responding officer.

The death of Justine Damond, who was white, comes after several years of public debate about police use of force following the video-recorded deaths of black men at the hands of officers.

“Mainstream America is now looking at this and saying, `Wow, we’ve got a problem,’ and yet it’s been going on over and over,” said Brent Wilkes, executive director of the League of United Latin American Citizens.

Matthew Barge, executive director of the Police Assessment Resource Center’s New York City office, said additional training for officers on when to draw and fire their weapons is always a good idea.

“Police officers can make mistakes because they’re human too,” said Barge, who has been the court-appointed monitor overseeing a federal agreement governing police in Cleveland.

Damond, a 40-year-old yoga instructor and life coach, called 911 twice on the night of July 15 to report a possible sexual assault behind her home before she was shot by Minneapolis Officer Mohamed Noor.

Noor’s partner, Officer Matthew Harrity, told investigators he was driving in the alley with all of the squad car’s lights off when he was startled by a loud noise that authorities did not describe. Harrity said Damond appeared at the driver’s side window “immediately afterward” and Noor fired, striking her in the abdomen.

She died at the scene.

Noor has declined to be interviewed by state investigators. The city’s police chief agreed to resign Friday.

Damond’s relatives in Australia have hired lawyer Robert Bennett, who represented the family of Philando Castile, a black motorist who was also gunned down by a Minneapolis-area officer. Bennett told The Star Tribune on Thursday that Damond was “the most innocent victim of a police shooting he has ever seen.

Castile was fatally shot by an officer during a 2016 traffic stop in a St. Paul suburb seconds after he told the officer he was armed. Officer Jeronimo Yanez, who is Latino, was acquitted this year of manslaughter and two lesser charges.

“I’m not saying Philando wasn’t innocent too,” Bennett told the Minnesota newspaper. “But here is someone who called the police and was trying to stop someone from being hurt.” Instead, she “ends up being shot in her pajamas.”

Some observers have drawn comparisons between Damond’s death and that of Charleena Lyles, a 30-year-old pregnant mother.

Within minutes of arriving June 18 to take a burglary report, two Seattle officers drew their guns and shot Lyles in front of three of her children. The officers said they feared for their lives and had no choice but to use lethal force after Lyles tried to stab Officer Jason Anderson in the stomach and cornered Officer Steven McNew in the kitchen.

As with Damond, there is no video of the confrontation, and her death has prompted outrage among family and community members, who questioned why the officers could not use nonlethal methods. Lyles was black, and the officers were white.

“She’s actually the one to dial 911 and … she ends up dead on the floor in front of her children,” James Bible, a lawyer for the Lyles family, said last month.

Seattle Mayor Ed Murray has ordered the police department to equip patrol officers with body cameras “so we know what happens during interactions with the public.”

Kevin Davis was shot by a DeKalb County, Georgia, police officer in December 2014 after calling 911 to report his girlfriend had been stabbed. Davis, who was armed, was not told by the emergency operator that police had arrived at the scene.

The responding officer, Joseph Pitts, shot Davis’ dog and said Davis did not immediately respond to a demand that he drop his weapon.

Civil rights groups are calling for volunteers to be trained in the legalities of using personal cellphones to record video of police to ensure there is a record of what happens when officers interact with citizens.

The Multicultural Media, Telecom and Internet Council and 10 other civil rights organizations say private video can become a tool to help prosecute wrongdoing or clear police officers when they are in the right, MMTC President Kim Keenan said.

“It takes (Damond’s) shooting for other people to figure it out,” Keenan said. “Now you have all of these people who care – because it didn’t happen over there to them.”