Mother Teresa: ‘Saint of the gutters’ canonized at Vatican 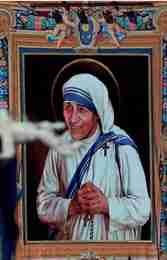 VATICAN CITY – Elevating the “saint of the gutters” to one of the Catholic Church’s highest honors, Pope Francis on Sunday praised Mother Teresa for her radical dedication to society’s outcasts and her courage in shaming world leaders for the “crimes of poverty they themselves created.”

An estimated 120,000 people filled St. Peter’s Square for the canonization ceremony, less than half the number who turned out for her 2003 beatification. It was nevertheless the highlight of Francis’ Holy Year of Mercy and quite possibly one of the defining moments of his mercy-focused papacy.

Francis has been dedicated to ministering to society’s most marginal, from prostitutes to prisoners, refugees to the homeless. In that way, while the canonization of “St. Teresa of Kolkata” was a celebration of her life and work, it was also something of an affirmation of Francis’ own papal priorities, which have earned him praise and criticism alike.

“Let us carry her smile in our hearts and give it to those whom we meet along our journey, especially those who suffer,” Francis said in his homily.

Born Agnes Gonxhe Bojaxhiu on Aug. 26, 1910, Teresa came to India in 1929 as a sister of the Loreto order. In 1946, she received what she described as a “call within a call” to found a new order dedicated to caring for the most unloved and unwanted, the “poorest of the poor” in the slums of her adopted city, Kolkata.

The Missionaries of Charity order went on to become one of the most well-known in the world, with more than 4,000 sisters in their trademark blue-trimmed white saris doing as Teresa instructed: “small things with great love.”

At the order’s Mother House in Kolkata, hundreds of people watched the Mass on TV and clapped with joy when Francis declared her a saint.

They gathered around Teresa’s tomb which was decorated with flowers, a single candle and a photo of the wrinkled saint.

“I am so proud to be from Kolkata,” said Sanjay Sarkar, a high school student on hand for the celebration. “Mother Teresa belonged to Kolkata, and she has been declared a saint.”

For Francis, Teresa put into action his ideal of the church as a “field hospital” for those suffering both material and spiritual poverty, living on the physical and existential peripheries of society.

In his homily, Francis praised her as the merciful saint who defended the lives of the unborn, sick and abandoned, recalling her strong opposition to abortion which often put her at odds with progressives around the world.

“She bowed down before those who were spent, left to die on the side of the road, seeing in them their God-given dignity,” he said.