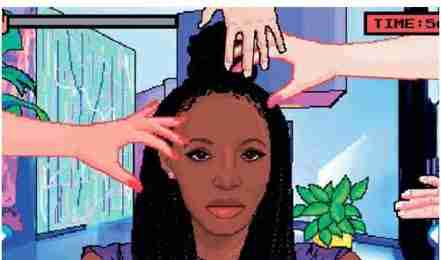 At hairnah.com: Can’t touch this.

WASHINGTON (AP) – Art director Momo Pixel moved to Portland, Oregon in 2016, and confronted a challenge she had never experienced before: Strangers reaching out to grab or stroke her long braided hair, often without her permission.

“I would be walking down the street visibly mad,” Pixel recalled.

One day, she told her boss about it. In trying to mimic that scene, he playfully ducked imaginary hands coming toward him. Pixel remarked that it would make a funny game.

With the support of her employer, advertising agency Wieden+Kennedy, an online game, “Hair Nah!” was born. Since Pixel shared it on Twitter on Nov. 15, the game has received more than 51,000 likes and 27,000 retweets and caught the attention of celebrities including television producer Shonda Rhimes and Black Lives Matter activist DeRay Mckesson.

In 2016, R&B singer Solange Knowles addressed the issue in a song titled, “Don’t Touch My Hair.”

“I had it happen to me once 10 times in a day,” Pixel said. “So to some people, this game is exaggerated. But when you’re the person and people are invading your space, it feels like it’s all the time.”

“Hair Nah!” has a vibrant ’80s aesthetic and begins with a black woman as the subject, allowing the player to select from various skin tones and hairstyles and a travel destination.

The player needs to help the character make it to her destination by swatting away white hands that emerge from all sides of the screen, trying to touch her hair. The reaching is punctured by voiced phrases that strangers said to Pixel herself, from “is it attached to your head?” to “so fluffy!”

“I imagined myself in the game swatting away hands – something I wish I could actually do,” she said.

Tul Elsiddig, 22, a community organizer in Chicago, said he experienced people touching his hair a lot in college, primarily from South Asian and Arab people. He would be greeting peers and then feel someone’s hand rubbing his afro.

“Every single time, that infuriated me,” he said. Elsiddig said he perceived those instances as an extension of disrespect for black people’s bodies.

“Why do you feel comfortable touching black people you don’t know, when you wouldn’t touch a white person you don’t know?” he questioned.
The game also reveals the lack of diversity in the world of video games.

“There is nothing out there like this that talks to us,” Pixel said. “We’re not the protagonists of games. We’re not even in games.”

“Whenever you see yourself in something, you understand that you are important,” Tyree said. “For those who have typically been excluded from a crowded marketplace like the video game arena, when you see yourself, you see that someone cares enough to represent you.”

Pixel said the response to her game has been generally positive, but there has been pushback, too, mostly from people who question the prevalence of this action or why it is a big deal.

“The game would not exist if there were not a problem,” Pixel said. “I think oftentimes, people get upset at the result of the issue instead of getting upset with the issue.”

Pixel said she now has plans to develop the game into an app with the same message:

“Respect peoples’space. Don’t touch them. This is not hard, people.”