The heart is mightier than the sword 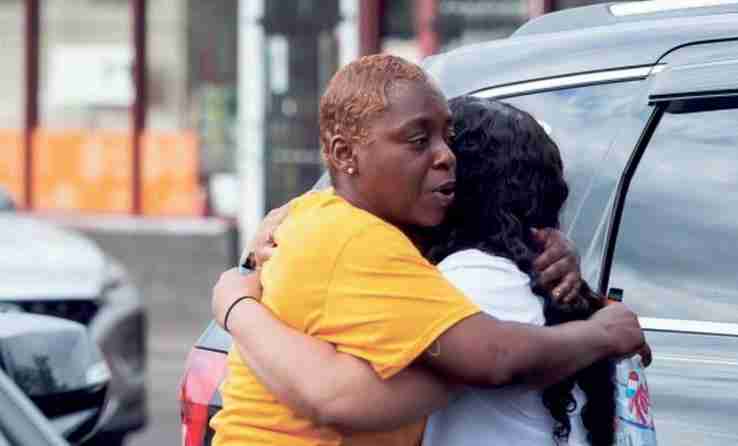 Sounds like a horror movie on permanent rewind through the brain, through the soul. Catch your breath, buy a gun. What other choice do you have? It’s called, among other things, “white replacement theory” — but my sense is that the fear itself (fear of God-knows-what) comes ﬁrst. When it ﬁnds a name, what a sense of relief that must be: knowing who the enemy is, where the enemy lives. Now you can go to war.

I take a deep breath. Violence is situation normal, not just in the United States but across much of the planet. Often the violence is simply an abstraction, aka, war, which is always, always necessary when we’re the ones who wage it, and the people we kill, including the children, are simply collateral damage. But war always comes home, where the victims are fully human . . . if they actually make the news.

“Once startling and noteworthy,” Keeanga-Yamahtta Taylor writes in a recent New Yorker article, “mass shootings have melded into the background of life in the U.S. Since January, there have been almost two hundred shootings involving at least four victims shot or killed. . . . This must be viewed within the context of the growing normalization of racism and political violence in the U.S.”

These words, of course, were written in the wake of the massacre on May 13 at a Tops Friendly supermarket in a segregated neighborhood in Buffalo, NY. Thirteen people were shot (11 of them African American), 10 of whom died. The killer was a blatant racist, who had posted a 180-page, hateﬁlled manifesto online prior to his assault. The manifesto, which acknowledged his admiration of previous mass murderers with racist motives, discussed the dangers of “white replacement” — people of color are taking over, claiming the same importance that white people have and, in the process, diminishing the importance of the whites. There’s one obvious solution: Go to war!

And because we live in a country where guns are everywhere, and remarkably easy to come by, young boys — the killer was 18 — can play war for real, without bothering to enlist. And Payton Gendron decided to go to war.

I mention his name for one reason only: I want to address a moment in his life before he drove 200 miles to Buffalo and opened ﬁre. Last spring, as he neared the end of his senior year in high school, he and fellow students were asked to think about a school project addressing their plans after graduation. Here’s what Payton Gendron said: He wanted to commit a murder-suicide.

Oh my God! The “threat” was unrelated to race, but it shocked the hell out of people. He claimed to be joking, but the state police were summoned and the boy, then 17, was given a mental health evaluation and hospitalized for a day and a half.

That’s it — a brief, sudden revelation to school authorities of the horror movie on continual rewind through Payton Gendron’s brain. According to an Associated Press story: “The revelation raised questions about whether his encounter with police and the mental health system was yet another missed opportunity to put a potential mass shooter under closer law enforcement scrutiny, get him help, or make sure he didn’t have access to deadly ﬁrearms.”

As I read those words, I felt an enormous squeeze of frustration, which took me a while to begin understanding. As the story pointed out: “New York is one of several states that have enacted ‘red flag’ laws in recent years that were intended to try and prevent mass shootings committed by people who show warning signs that they might be a threat to themselves or others. . . .

“The long list of mass shootings in the U.S. involving missed opportunities to intervene includes the 2018 massacre of 17 students at a high school in

Parkland, Florida, where law enforcement ofﬁcials had received numerous complaints about the gunman’s threatening statements, and the killings of more than two dozen people at a Texas church in 2017 by a former U.S. Air

Force serviceman who was able to buy a gun despite a violent history.”

Slowly it started kicking in. What I was reading in this story about another mass shooting in America — the Land of the Free (to kill) — was ofﬁcial cluelessness on full display. We’re clueless about the nature of social safety. We think of it as something that is linear and hierarchical, with authoritative action kicking in primarily after the fact.

“Authorities said Sunday that they were investigating the attack on predominantly Black shoppers and workers at the Tops Friendly Market as a potential federal hate crime or act of domestic terrorism.”

Prior to the occurrence of the shootings, the best the national imagination can do is come up with a red flag law: If somebody seems unhinged, or spews hate, the state can step in and temporarily conﬁscate his ﬁrearms. Problem solved!

But when I think about the 17-yearold high school senior who momentarily let loose a sarcastic idea for a school project — a mass shooting, followed by suicide — I see a deeply, deeply troubled human being who, in all likelihood, has spent most of his life alone, psychologically if not physically. And here’s where my own emotional wounds start to bleed.

What if schools were places where lonely, frightened kids could talk? I think about the peace circle, the concept of Restorative Justice, where all participants sit in vibrant equality, each given the opportunity to talk, everyone else listening. This is catching on in some school districts, but of course it’s only a beginning. For a moment I envision a social infrastructure that embraces all of us and doesn’t condemn anyone’s fear and hatred, but rather, listens to him, values him, learns from him and walks with him into the darkness.

The heart is mightier than the sword. I’m allowing myself to imagine a world where most people believe this.

Previous post 2022 is the year of all-inclusive travel, and here’s reason why