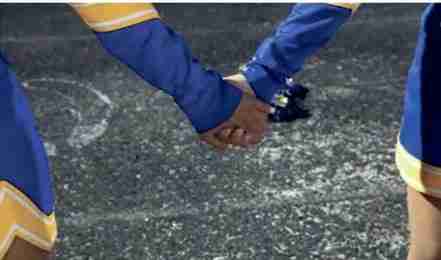 ROWLAND, N.C. – Six teenage girls put down their pompoms on a Friday night behind their tiny high school in their tiny town.

They lined up along the football field. As “The Star-Spangled Banner” began, each dropped to one knee and by morning, the culture wars splintering the nation would unfurl around them in miniature, in the most racially diverse rural county in America.

A parent had snapped a photo. Out it went onto social media. In poured calls for the girls to be punished, their principal fired.

Many lined up along ideological and racial divides and some saw people they’d known all their lives lined up on the other side. Those who gazed into the gulf in between were left with the same unsettling sense – that something is souring in America’s soul.

“This is the most lost I’ve felt racially in my entire life,” says Tiona Washington, the mother of one of the cheerleaders.

Her daughter, 14-year-old Aajah, grew up here in Rowland in Robeson County, where the population is split among whites, blacks and Native Americans and many often remark at how well they’ve overcome the scars of slavery and segregation to get along.

The only president Aajah had ever really known was African-American, like her. Then her county, which voted twice for Barack Obama, joined with the nation to elect Donald Trump, whose comments about Muslims and minorities seemed to her to only further divide Americans.

Aajah watched her new president say there were “very fine people on both sides”of the deadly white nationalist rally in Charlottesville, Virginia. He called on NFL team owners to fire any “son of a bitch” who continued kneeling to protest police brutality and racial inequality. He suggested in a speech that maybe police officers weren’t being rough enough.

“I watch TV every day and that’s all we see, police brutality or the KKK is coming out,” said Aajah. And so the shy girl who dreams of becoming a nurse took a knee alongside her friends, and awoke to find they’d been deemed a disgrace on Facebook by others in their county. One person said the girls must have intellectual deficiencies. A woman offered that she’d break her child’s knees if she’d done the same thing. Aajah’s mother remembers seeing KKK members dressed in white with torches as a kindergartner in the 1980s, and recalls the moment as a crushing of childhood innocence – a sudden awareness that some may hate her because of the color of her skin. She’d hoped her own daughter would never confront such racism.

“We’re back at a crossroads,” Tiona Washington said.“The question is:Where do we want to go from here?”

Days before the cheerleaders’ protest, the local newspaper interviewed Vonta Leach, a hometown hero who pulled his family out of poverty by playing football in the NFL. The headline read: “I would have kneeled.”

Some Leach had considered friends pounced. “Some of the comments were, `He ain’t nothing but an ‘N,’” he said. He was raised in Rowland and moved back to the county because he wanted his children to grow up here. A church building bears his name.Yet even he couldn’t escape the scorn of those who he believes have been emboldened by the president’s racially tinged rhetoric.

“I’m well-off.But at the end of the day, I’m still black, and to some people I’m still a you-know-what,” he said. “So I do understand that now.”

On the other side of the divide in Robeson,the cheerleaders’ demonstration was just one more sign of how American values of tradition, patriotism and honor seem to be unraveling. Billy Hunt, a Native American and a Marine on the school’s booster club, answered call after call from those who were no longer willing to support an upcoming fundraiser. He thinks the girls failed to consider people like him, those who served their country and see the flag as a symbol of that service, of loved ones and limbs lost to war. It seemed to him that they’d chosen a side, without imagining life on the other one.

“I’d like to see it back to people start feeling for each other again,” Hunt said.

The morning after the game, Christopher Clark, the principal of South Robeson High, received a message from a friend: “You don’t have the guts to lead.” As similar messages kept coming, Clark tried to explain that the Constitution protects the right to protest – that public outrage is not the rule of law. But it seemed many would rather it were. “We’ve got a cultural battle going on for
the heart and soul of America,” he said.

“We’ve heard, `We’re taking this country back.’Well,where do you want to take it?” He understands that to some, that might harken back to the wholesome world of Ozzie and Harriet.But that was also a time when Clark, a Native American, had to go to the pharmacy through the back door.

Clark would never have knelt or allowed his own children to, either. But he doesn’t believe he gets to make those choices for everybody else.