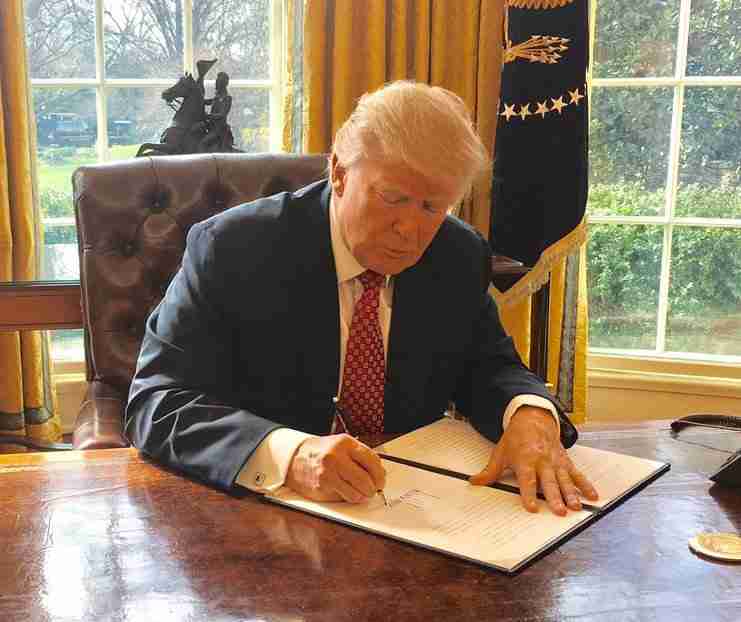 “Part of President Trump’s effort to create a booming American economy includes moving Americans from welfare to work and supporting and encouraging others to support common-sense reforms that restore American prosperity and help them reclaim their independence,” he said.

The order focuses on looking for ways to strengthen existing work requirements and exploring new requirements for benefits such as food stamps, cash and housing assistance programs.

Trump has long accused beneficiaries of abusing government assistance programs and has claimed many who have no intention of working make more in benefits than those with jobs.

“I know people that work three jobs and they live next to somebody who doesn’t work at all. And the person who is not working at all and has no intention of working at all is making more money and doing better than the person that’s working his and her ass off,” Trump said in November. During the campaign, he pledged that, under a Trump administration, families “trapped in welfare” would be “provided with jobs and opportunity.”

The administration has already made several moves pushing work for Medicaid recipients and those who use the Supplemental Nutrition Assistance Program, or food stamp, program.

In January, officials announced that states would be able to impose work requirements for Medicaid. And they’ve proposed tightening the existing requirement that able-bodied adults who want to receive SNAP benefits for more than three months at a time must work in some capacity.

The proposal would raise the age limit for recipients who are exempt from the requirement and restrict the ability of states to offer waivers. The Department of Agriculture has been soliciting public comment on the issue.

The order gives various Cabinet secretaries 90 days to review the programs their agencies offer, and recommend possible changes. Advocates argue that, while encouraging people to work is fundamentally a good thing, imposing strict requirements on already vulnerable populations, particularly when coupled with an aggressive effort to slash funding and shrink public assistance programs, could be disastrous for those in need.

Such requirements could have dire consequences for those already experiencing barriers to finding, and keeping, a job, including single mothers who can’t afford child care, people who lack access to transportation and those who suffer from mental illness.

But Trump argues in the order that some programs designed to help families “have instead delayed economic independence, perpetuated poverty, and weakened family bonds.”

The White House had once identified overhauling the welfare system as one of its top two legislative priorities for 2018, along with a major investment in infrastructure. But GOP leaders, including Senate Majority Leader Mitch McConnell, told the president there was little chance of passing anything that needs Democrats’ votes.

Trump appeared to agree as he huddled with GOP leaders at the Camp David presidential retreat in January.

“It’s a subject that’s very dear to our heart,” Trump said then. “We’ll try and do something in a bipartisan way. Otherwise, we’ll be holding it for a little bit later.”

Next post Trump to hold tax event in Florida